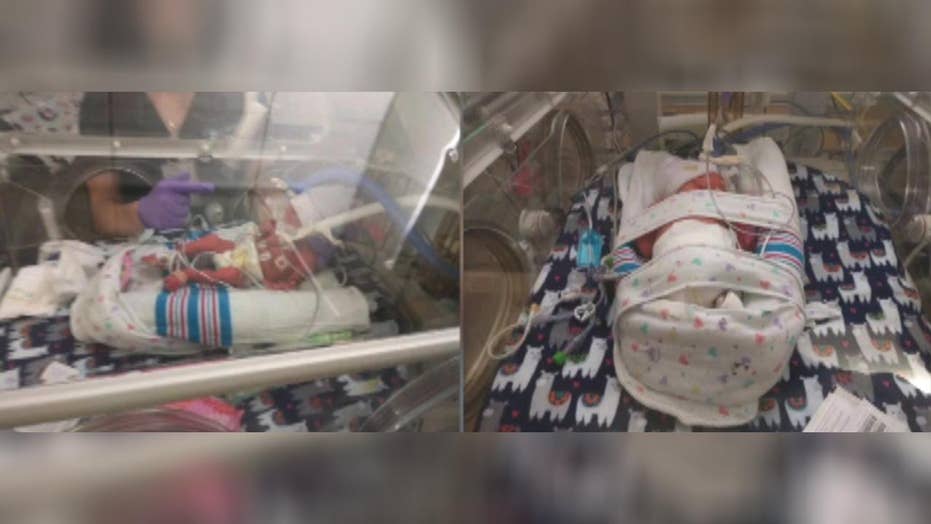 Eight people died when a semi-truck crashed into a Greyhound bus.

Christy Westerdale was traveling with the father of her children, Joseph Chandler, from Oklahoma to their home in Stockton, Calif., when the crash occurred on Interstate 40 in New Mexico on Thursday afternoon. The Greyhound bus was carrying nearly 50 people when a semitrailer going in the opposite direction lost the tread on its left front tire and veered across a median, smashing into the bus, police said. Along with the eight killed, 25 people were injured, including three young children.

The crash forced Westerdale to give birth two months early.

"I just thank God that my babies are OK," Westerdale told FOX 40. "I just can't believe they're so strong through it all and everything."

Chandler said he was knocked out during the crash but was able to regain consciousness.

BLOWN TIRE MAY BE CAUSE OF HEAD-ON CRASH THAT LEFT AT LEAST 8 DEAD IN NEW MEXICO, OFFICIALS SAY

"I got my whole family off the bus and it’s a miracle. I cannot believe it. Everybody that was sitting in front of my family is dead," he told FOX40.

He described the incident as being in “an apocalyptic movie.”

"It was kind of like being in an apocalyptic movie. It was like the world was ending. It wasn’t just happening to me," he said.

Chandler said he got his daughter off the bus before going back to carry Westerdale.

"I thought she was dead and I was gonna get her body off the bus when she woke up in my arms," Chandler told FOX40. "I was like, ‘Oh my God! Come on baby, we’re going to be OK, we’re going to get off this bus."

Westerdale had a shattered knee, broken leg and separated pelvis in the crash and will be OK with physical therapy. The twins will have to remain in the hospital in New Mexico for a few months before they can go home to Stockton.

"We’re so far away from home and we have nothing. I have no car, no housing and we’re going to be here for a while," Chandler said.

The couple launched a GoFundMe page to help raise money for their living expenses. Westerdale said she remains optimistic during the recovery.

"I’m hopeful to recover and see my babies recover," Westerdale said. "Get through this all and put it behind us."