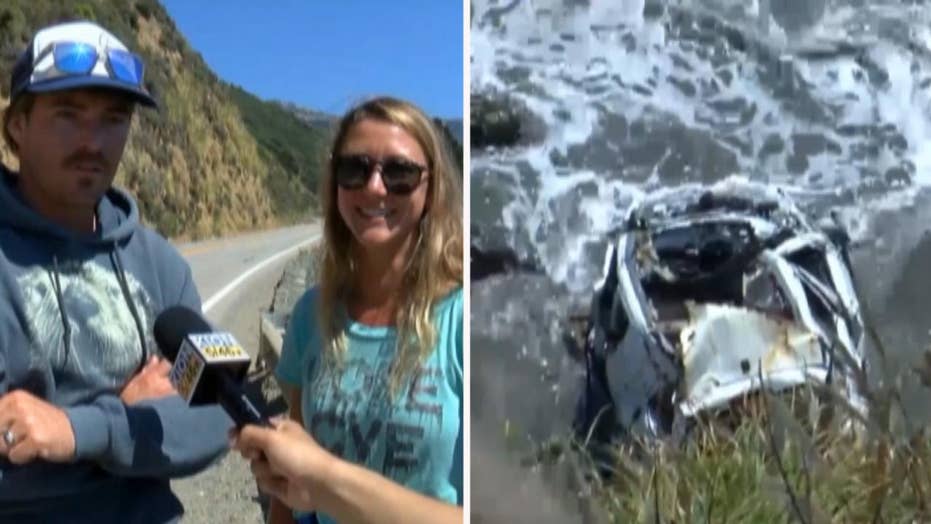 Couple find woman missing for a week who drove off cliff

Raw video: California couple who were searching for places to fish discover car at bottom of cliff and woman who survived the plunge and was missing for a week about a mile away.

An Oregon woman is thankful for her “incredible” life after she survived a week at the bottom of an oceanside cliff in California’s Big Sur by using a radiator hose to siphon water when her SUV plunged 250 feet down.

Angela Hernandez, 23, was found Friday by a couple who saw her wrecked SUV at the bottom of the cliff, Monterey County Sheriff’s Office said. Hernandez was last seen on July 6 in Half Moon Bay. Hernandez recalled the horrifying ordeal on Facebook, revealing her vehicle ran off the road when she was trying to avoid hitting a small animal. She said she lost control of her vehicle.

"I don't really remember much of the fall. They say I fell somewhere around 250 feet," she wrote on Facebook Sunday. "The only thing I really remember after that was waking up. I was still in my car and I could feel water rising over my knees."

Hernandez was able to compose herself and used a multi-tool to smash the window open. Despite bleeding from her head and having her entire body aching, she said she could only think of her sister Isabel.

"Eventually, I was able to break out of my car and jump into the ocean. I swam to the shore and fell asleep for an unknown amount of time," Hernandez recalled. "When I woke up, it was still daylight and it was only then that I had finally realized what had happened."

Hernandez said she felt pain in her shoulder, hips, back and thigh. She spotted her demolished SUV washed up on the shore.

"I looked down at my feet and saw that my shoes were gone," she said. "I tried getting into my car, because I had a gallon of water hidden away inside (I was never able to get to it, by the way, ahah)."

Hernandez spent the next few days attempting to find someone for help, but without any luck. She recalled finding a spot among the rocks and sitting there in hopes of seeing a car to get help.

“I could see cars driving across the cliff and felt like if I could yell just loud enough, that one could hear or see me. That's all it would take to make it back to my family,” she said. “Just one person noticing me. I'd usually stay there until the sun became unbearable and then would find a way to slide myself back down to the shore.”

By the third day, Hernandez said she began to feel dehydrated. She went to her car looking for anything she can use to possibly get fresh water. She located a black hose that she later used to collect water from a nearby creek.

"Every day, this became my ritual. I'd walk up and down the beach looking for new high grounds, screaming 'help' at the top of my lungs, and collecting water falling from the top of the cliffs. Every night, I'd find the highest point I could climb up to and find somewhere to fall asleep before the tide would rise. Every morning, I'd wake up soaked in sea mist and watch the sun rise."

On the seventh day, Hernandez finally spotted a woman after waking up from a nap. She ran to get help as a man gave her water to drink. The rescue team came shortly after and pulled her up from the cliff.

Hernandez found out she suffered a brain hemorrhage the first few days following the crash. She also had four fractured ribs, broken and fractured collar bones, a lung collapse, ruptured blood vessels in both eyes and sunburn on her hands, feet and face.

Hernandez said she’s grateful she survived the terrifying ordeal and is happy to be back with her family.

"At the end of the day, none of that matters. I feel like I have everything I've ever wanted," she said. "I've experienced something so unique and terrifying and me that I can't imagine that there isn't a bigger purpose for me in this life."