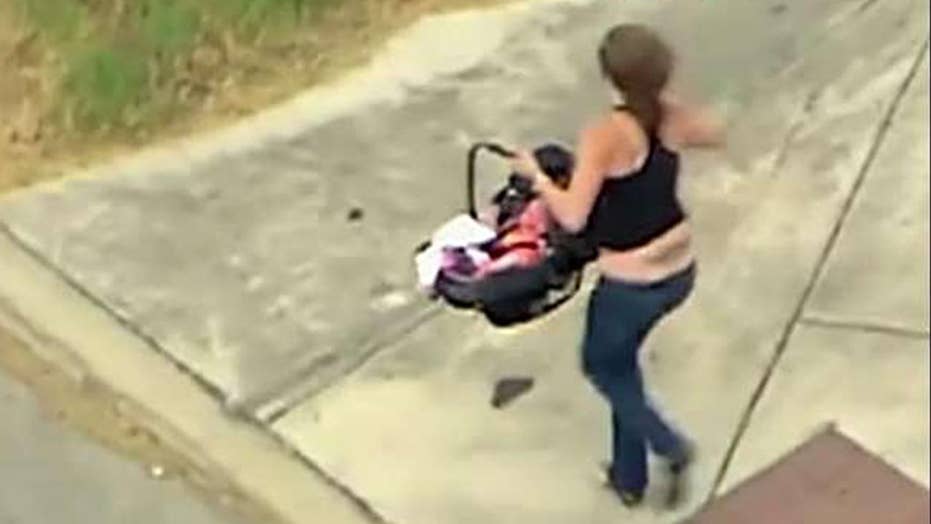 The woman later attempted to escape on foot while carrying the baby.

Authorities in Texas released video on Friday showing a woman leading police on a high-speed chase before crashing into another vehicle and attempting to carjack another truck while holding a baby.

The footage released by the Texas Department of Safety shows the chase in Bexar County in June, after the female driver, who had outstanding warrants, fled at a high rate of speed and approached 100 mph at times.

Police used a tire deflation device to disable the front tire of the Mercedes SUV, but the woman continued to flee, crossing into oncoming traffic at times.

Eventually, the woman lost control and slammed into the back of a pickup truck at an intersection.

Video released by Texas police show the woman driving at a high rate of speed into oncoming traffic. (Texas Department of Public Safety)

In the video, the woman can then be seen getting out of the SUV and running from police while holding the baby in a carrier.

After nearly dropping the baby, the woman then jumps into the front seat of a passing vehicle, which police said she attempted to carjack.

The woman ran with the child through traffic after crashing into another vehicle. (Texas Department of Public Safety)

A trooper then arrived and blocked the other vehicle from escaping, drawing his gun on the woman while a second trooper goes in and safely gets the baby from the car.

Police said the woman, who was not named, was charged with evading arrest, possession of controlled substance and endangering a child.