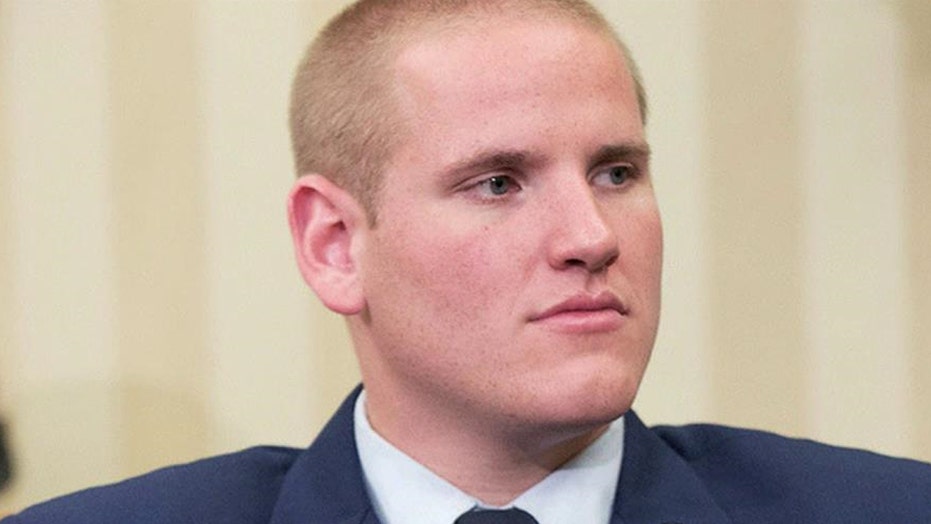 Witnesses say Stone was stabbed trying to protect a woman

U.S. airman Spencer Stone, hailed as a hero in the French train attack in August, was protecting a woman when he was stabbed during a street fight outside a California bar, a witness says.

Eric Cain, a worker at A&P Liquors, told local TV in Sacramento Thursday that he saw a man and a woman fighting and then saw Stone intervene.

Cain told Fox affiliate KTXL-TV that he thought what he was witnessing was just another bar fight early Thursday morning.

"Next thing I know, I start walking back in the store and I hear like someone got hit so I turn back around and that's when it started running in the street," Cain told the station.

He said he realized one of the men involved was stabbed but he didn’t know at the time that it was Stone.

"It looked like he was protecting the girl because there was girls and guys and after the fight they all just kinda dispersed," Cain said.

He told another local station that Stone confronted the man who was fighting with the woman “and kinda got in his face,” the Los Angeles Times reported.

Stone had his condition upgraded from serious to fair Friday and was reported in good spirits as he recovers from the stabbing.

The serviceman was out with three women and another man when they got into a fight near a downtown Sacramento bar with another group of people, Sacramento Deputy Police Chief Ken Bernard said.

"We know it's not related to what occurred in France," Bernard said.

The deputy chief didn’t disclose what sparked the fight but said there’s no evidence the assailants knew who Stone was.

A grainy surveillance video from a camera outside the A&P liquor store shows a large man who appears to be Stone fighting against a half-dozen people at an intersection.

In the video, the man who appears to be Stone knocks one person down before another man strikes at his back.

Police are looking for Stone’s assailants..

Sacramento Police Sgt. Doug Morse said Friday police interviewed a 24-year-old woman who was also hurt in the fight and was treated at a hospital for abrasions.

"We're really hoping that additional witnesses or anyone involved comes forward," Morse said. "Right now detectives are working around the clock to clarify all that stuff. It would be way too premature to discuss what witnesses saw."

Bernard said he did not know whether Stone was drinking but noted that others in his group were.

Kirk said Stone remained heavily sedated in the intensive care unit. He declined to discuss any details about the surgery or whether any vital organs were damaged in the stabbing, beyond saying Stone had "significant injuries."

The airman was conscious when he arrived at the hospital.

"I suspect given his history of recent events he is quite a fighter," Kirk said.

Doctors expect Stone to fully recover. Stone's family asked Kirk to convey their gratitude for all the expressions of concern they had received.

The incident comes after Stone and two of his childhood friends from Sacramento, National Guardsman Alek Skarlatos and college student Anthony Sadler were vacationing in Europe when they sprang into action aboard a Paris-bound passenger train and tackled Ayoub El-Khazzani, a man with ties to radical Islam. He had boarded the train with a Kalashnikov rifle, pistol and box cutter.

Stone, who is assigned to Travis Air Force Base in California, suffered a severely cut thumb and a knife wound to his neck during the struggle with the gunman.

President Barack Obama met with the three Americans last month, and they have been awarded France's highest honor.