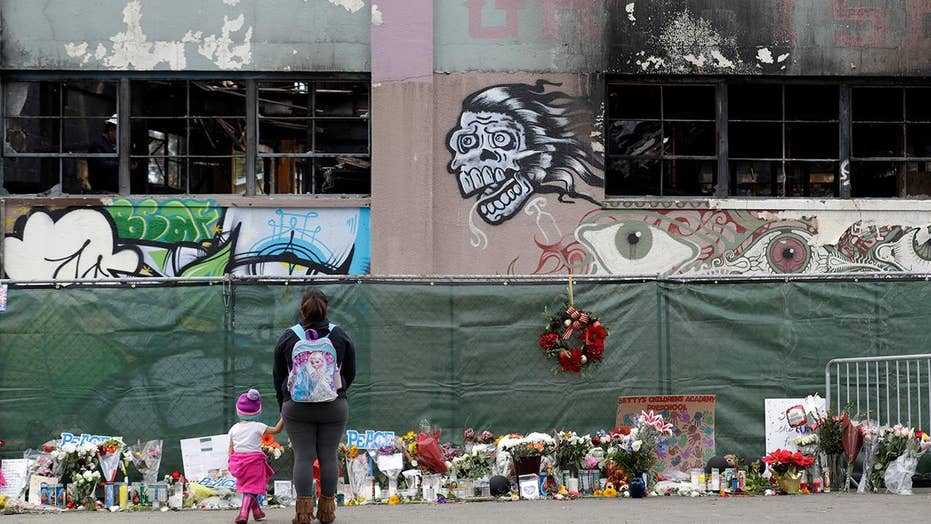 A fire in December 2016 killed 36 people at an Oakland warehouse that had been converted into an artist collective.

A man scheduled to testify this week as a witness in the “Ghost Ship” trial -- involving a fire at a Northern California warehouse that killed 36 partygoers -- has died before he was able to take the stand.

Robert Jacobitz died Sunday after collapsing in a parking lot in San Pablo, Calif., the East Bay Times reported. Police said they do not suspect foul play, as the man had suffered from extensive health problems.

Alameda County prosecutors had planned to call Jacobitz to testify this week in the trial of Derick Almena and Max Harris, who are each charged with 36 counts of involuntary manslaughter in connection with the Dec. 2, 2016, fire in an Oakland art collective warehouse known as the Ghost Ship. The fire erupted during an unpermitted music concert.

Officers responded to the parking lot Sunday around 2:40 p.m. where they found Jacobitz unconscious. Emergency workers tried to resuscitate him for 30 minutes before pronouncing him dead.

Prosecutors announced the death of their key witness in court on Monday, saying the man had died from “an accident.” Police spokesman Capt. Brian Bubar told the East Bay Times that news reports claiming Jacobitz died in a car crash were not accurate.

“All I can say about it at this point is that we responded to no other fatal incidents that day,” Bubar said, adding that “there is nothing suspicious” about Jacobitz's death.

Bates said during opening statements last week that Almena turned to Jacobitz for inexpensive help with the warehouse's conversion after another contractor told Almena it would cost at least $5,000 to install a fire door and new stairs to the second floor.