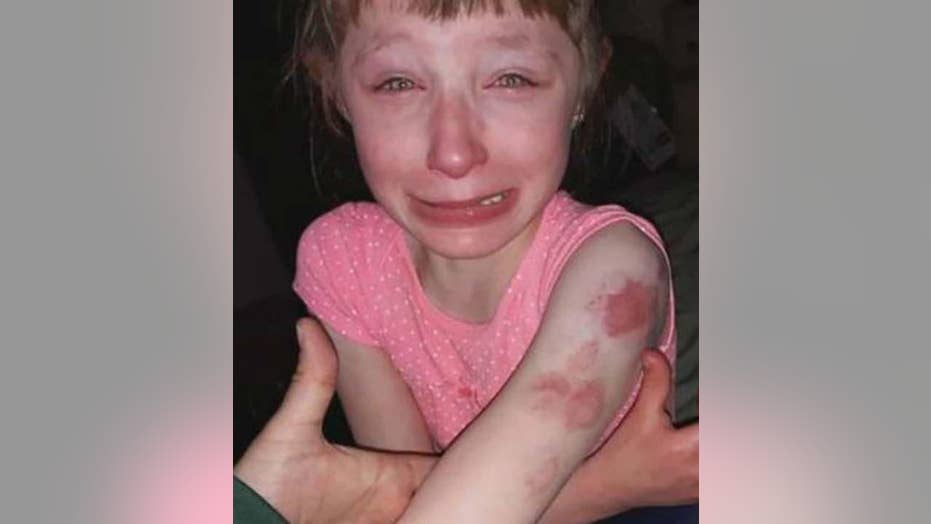 A Wisconsin 10-year-old girl with special needs was 'brutally' bitten by another mentally disabled student while riding the school bus this week.

A Wisconsin 10-year-old girl with special needs was "brutally" bitten by another mentally disabled student while riding the school bus this week, leaving the girl in pain with severe bruising on her left arm, according to reports.

Parents Lynn Waldron-Moehle and Chad Waldron claim another mentally disabled girl on the special-needs school bus gnawed into their daughter’s arm as she was constrained by a five-point-harness car seat and was unable to escape. The bus driver did not stop to intervene, they told Green Bay's WBAY-TV.

The couple said their daughter Lillian "Lilly" Waldron was sobbing inconsolably and clutching her arm when she got off the bus coming home from Langlade Elementary School in Green Bay.

Not initially realizing how badly her daughter was hurt, Waldron-Moehle brought Lilly home to take a bath and calm down. She said her daughter is developmentally delayed and, therefore, was unable to describe what had happened.

"She loves baths, and that's soothing to her. So, I brought her home, and I was getting her ready for the bath. I took her sweatshirt off, and that's when I noticed the major bruising on her upper arm," she said.

The parents said the school’s principal -- who reviewed video surveillance from the bus ride -- described the scene as "gruesome and horrifying to look at." Waldron-Moehle said her daughter had no way to defend herself and no adult present willing to help her.

“She can’t tell them to stop. She couldn’t get away. She’s in a five-point harness car seat. She just had to sit there and take it, and the bus driver wasn’t stopping,” Waldron-Moehle said.

“If you can’t keep an eye on these kids and they are special needs, then you need to bring somebody in to be watching, if the bus driver can’t do it,” the girl’s father added.

A representative from Lamers Bus Lines confirmed that drivers are permitted to step in when physical fights between students break out, but the parents allege that this driver chose to do nothing, WBAY reported. The Green Bay Area Public School District is conducting an investigation.

"Several administrators and myself immediately reached out to the family and met with them to address their concerns and provide support to ensure the physical and emotional wellbeing of our student," Superintendent Michelle Langenfeld said in a statement.

The parents plan to contact an attorney about the incident to ensure special needs students have proper supervision in the future. "I would like to see this not ever happen to another child. No other child needs to go through what Lilly went through," Waldron-Moehle said.

Lilly will be transported to school in a van with two adults and no other students beginning Thursday to ensure her safety, according to her parents. The girl who allegedly bit Lilly no longer attends the same school, the news outlet reported.