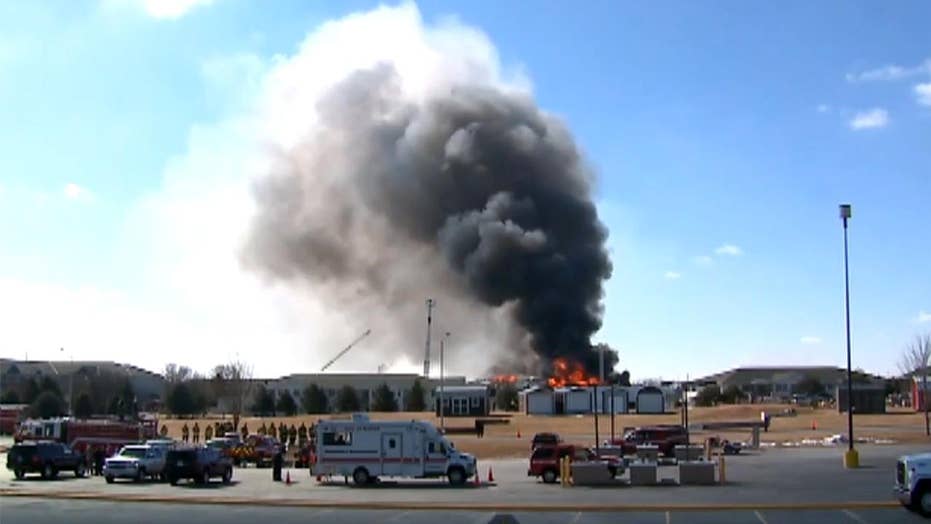 Wisconsin apartment building destroyed in controlled burn after tenant making homemade bombs was killed in explosion; Chemicals remaining after deadly blast were too volatile to move.

A Wisconsin man who was killed in an explosion at an apartment complex last month may have been a white supremacist building ISIS-style bombs, authorities say.

Benjamin Morrow, 28, of Beaver Dam, Wis., was found dead in his apartment on March 5 after he blew himself up accidentally while making homemade explosives in his “laboratory,” authorities believe, according to FOX6 Now. When authorities found Morrow, he was lying on the floor in front of his stove, which was still lit.

Authorities investigating the scene deemed Morrow's apartment a safety hazard and were forced to evacuate. Before demolishing the entire structure on March 15, investigators say they took another look inside Morrow’s apartment and found some unsettling objects.

A pistol, a ballistic helmet, hundreds of rounds of ammunition, long guns and “white supremacist material” were among some of the items recovered from the apartment. Investigators also found a bottle labeled “TATP” in his garage. Triacetone triperoxide is a “volatile chemical compound often used in homemade explosives,” FOX6 Now reported. The chemical is also used to make the “Mother of Satan” bomb used in the terror attack on Manchester stadium last year, the Daily Beast reported.

Beaver Dam police declined to say if Morrow identified as a white supremacist despite the material found.

“It does cause me some concern, but I want to make very clear just because Mr. Morrow was in the possession of this material, does not categorize in any particular light,” Lt. Terrence Gebhardt told CBS 58. “He could have been an individual that was doing research.”

However, Kevin Heimerl of the Wisconsin Department of Justice called Morrow’s apartment “a homemade explosives laboratory” and said it was possible the man may have been inspired by white supremacist groups. He declined to say which groups were highlighted in the material found.

Morrow worked as a quality control technician at Richelieu Foods. His former coworkers said he often smelled like mothballs.

Mothballs are composed of flammable materials.

Heimerl wrote in a second warrant that investigators were interested in Morrow’s storage unit, computers, flash drives and phone. Investigators hoped the records could help determine if Morrow was “acting alone.”

Morrow’s family described him in a different light: a religious man who worked hard. His obituary stated he graduated from Pensacola Christian College and majored in pre-pharmacy.