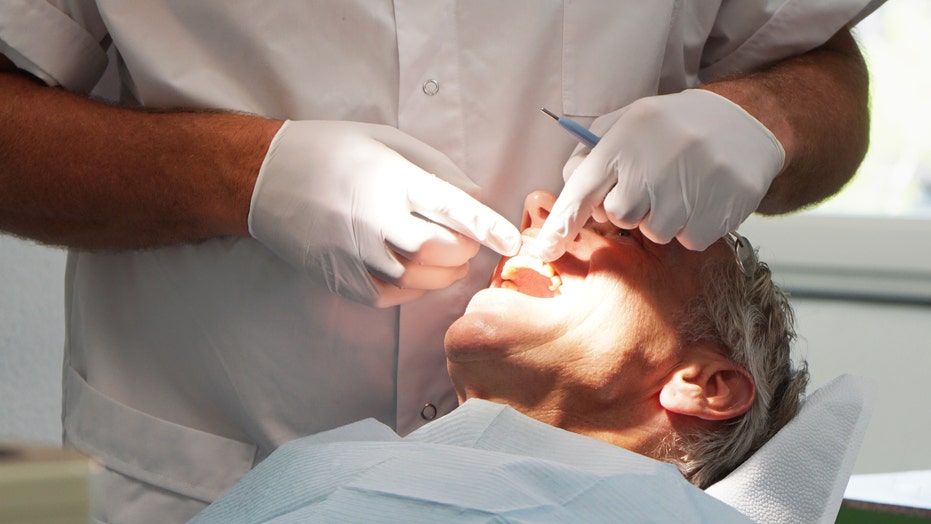 A Wisconsin dentist was found guilty of healthcare fraud and other charges after he made millions of dollars in a scheme by intentionally damaging his patients' teeth and charging them for fixing the damage he caused, according to federal prosecutors.

Charmoli, of Grafton, faces a maximum of 60 years in prison and is scheduled to be sentenced in June.

DENTIST WARNS WHY YOU SHOULD NEVER USE MOUTHWASH AFTER BRUSHING TEETH

Man at the dentist, having his teeth checked (iStock)

In the scheme, prosecutors said Charmoli, in 2015, started to aggressively sell patients on the need for crown procedures, a procedure where a tooth-shaped cap is placed on the damaged tooth.

After convincing his patients they needed crowns, prosecutors said Charmoli purposely broke his patients’ teeth with a drill during the procedures. He then submitted x-rays and photographs of the damaged teeth to insurance companies to obtain insurance coverage for the crowns.

Insurance companies believed those images represented the pre-operative condition of the teeth and paid the claims, prosecutors said.

A patient, Todd Tedeschi, testified that Charmoli convinced him to get two crowns done at once, so he could avoid having to repeat anesthesia – even though Tedeschi believed his teeth were fine.

"It seemed excessive, but I didn't know any better," Tedeschi said, according to the Milwaukee Journal Sentinel. "He was the professional. I just trusted him."

Charmoli billed over $4.2 million for crown procedures between 2016 and 2019, and he performed more crowns than 95% of Wisconsin dentists in each of those years, prosecutors said, citing data from an insurance company.

The scheme was revealed after Charmoli sold the practice in 2019. While reviewing files, the new owners realized the number of crown procedures was out of the ordinary.

Nearly 100 of Charmoli's former patients have also sued him for medical malpractice, however, those cases won't start until the outcome of the federal prosecution, the paper reported.

Charmoli's license to practice dentistry in the state of Wisconsin has been suspended since February last year. He was first licensed in 1986.