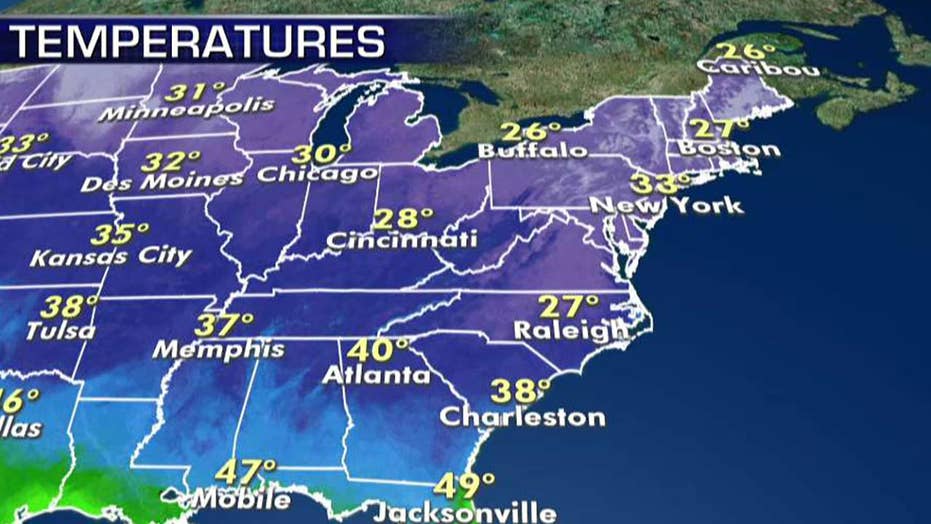 Wintry weather stretching across the nation's midsection is expected to create travel problems throughout the Midwest that will extend into the weekend.

The National Weather Service's Weather Prediction Center said a "complex" frontal system developing over the Mississippi Valley will produce light to moderate snow from parts of Nebraska, Missouri, and into Illinois, eventually stretching through the upper Great Lakes.

"We do have a mess of snow across portions of the Midwest and the Mississippi River Valley, across the Ohio Valley," Fox News Senior Meteorologist Janice Dean said Thursday on "Fox and Friends." "So just be prepared, we are going to see a little snow there, winter weather advisories are up."

In the St. Louis area, mixed precipitation is forecast to become all snow by Thursday night, with 1 to 3 inches of snow expected throughout the region.

An extended period of wintry weather is impacting the Midwest through the weekend. (Fox News)

"Plan on slippery road conditions," the NWS said. "The hazardous conditions could impact the morning and evening commute both today and Friday."

The Missouri Department of Transportation said Thursday morning that roads in the central and northern parts of the state were "covered" and slick driving conditions are being reported.

Transportation officials told FOX2 they will be fully staffed into Friday as the wintry mix moves into the area, with crews continuing to make sure that any salt washed away by rain gets reapplied before the second round of snow.

Those out on the roads Wednesday night when it was only raining said conditions already were going downhill.

The extended period of wintry precipitation will stretch from Missouri to the upper Great Lakes. (Fox News)

"We were coming back from Chesterfield (Missouri) and it was starting to sleet pretty good, we were heading back home to Poplar Bluff," Nicole Kearby told FOX2. "I definitely want to get home before it gets worse"

As the system moves east, more snow is forecast to spread into parts Wisconsin and Michigan while rain develops across the Southeast into Saturday. A new storm system will spread the rain from the Southeast into the Mid-Atlantic, and then into New York and southern New England.

"Further inland in New York and New England, warming aloft changes snow into sleet and freezing rain," according to the WPC. "Interior New Hampshire and Maine may see freezing rain amounts of a quarter to half of an inch."