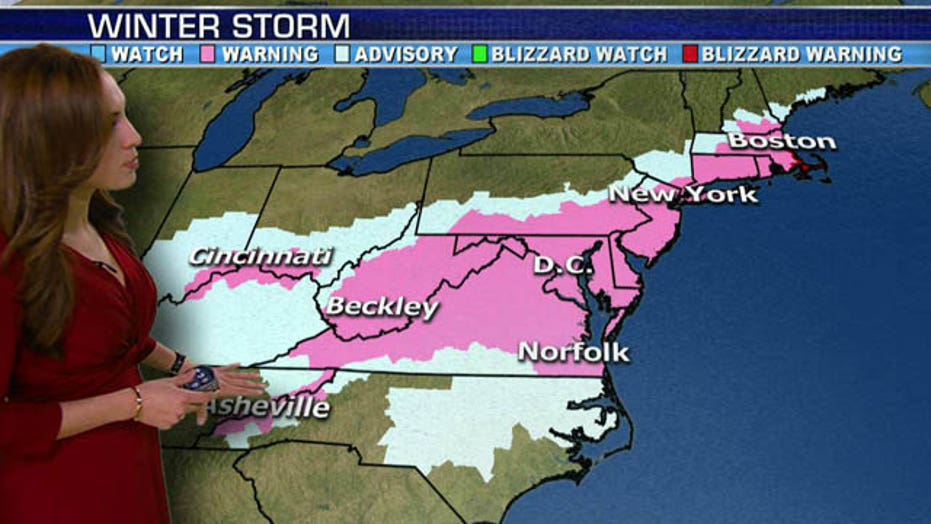 A massive winter storm packing up to a foot of snow, strong winds and icy temperatures slammed into the northeastern United States on Tuesday, canceling flights, closing government offices and sending children home from school.

The sprawling storm, which stretched for a 1,000 miles between Kentucky and Massachusetts, could bury Boston in up to 15 inches of snow while delivering 10 to 14 inches to Philadelphia, a foot in New York City and up to 10 inches in Washington, D.C. area, the National Weather Service and Fox affiliates reported.

Authorities warned of heavy winds and hazardous driving conditions along the east coast as the storm, which began mid-morning, was expected to continue through the late evening hours, with the heaviest snow expected Tuesday afternoon and evening.

Nearly 3,000 flights were canceled Tuesday, with airports from Washington to Boston affected. An additional 885 flights for Wednesday were called off as well. Amtrak planned to cut back train service in the afternoon.

The Pennsylvania Department of Transportation reduced speeds on interstates and other major roads, and said it had already blown through more than half of its $189 million winter weather budget.

The storm is part of a bitter blast of arctic air that is expected to sweep south into Iowa and as far east as Maine by Tuesday night, and remain entrenched through Thursday.

Paul Collar, a meteorologist with the National Weather Service, said highs could be in the single digits.

"It's not to the extent of the last outbreak, but it's still bitterly cold," he told The Associated Press.

Some areas across the U.S.-Canada border could see nighttime lows in the negative double digits in the next few days, he said.

Portions of Minnesota, Vermont, New Hampshire and Maine were under wind chill warnings, meaning wind chills could be 34 degrees below zero or colder.

"With these temperatures you're going to have issues with exposed skin and frostbite, but not to the degree of severity of the last outbreak," he said, describing it as "a normal cold event you'd see in a typical winter."

The last blast of arctic air caused a propane shortage in several states, with some declaring energy emergencies to speed up deliveries.

David Field, the executive vice president of the Ohio Propane Gas Association, told Fox8.com that the Department of Transportation has issued a regional order loosening rules for propane transportation in 10 Midwest states. A similar order is in effect for 14 Eastern states, he said.

“The month of December brought historically cold weather, ice and snow, which further inhibited the transportation of propane. Demand for residential, commercial and agricultural heat soared,” Field told the station. "All these combined to prevent regional inventories from recovering and the existing pipeline and terminal infrastructure has been unable to recover.”

Across the east coast, people tried their best to cope with the cold conditions.

Standing in Philadelphia's LOVE Park with snow swirling around her, visitor Jenn Byrne of Portland, Ore., said the nasty weather put a crimp in her plans to do a "giant walking tour" of the city. But she vowed to soldier on, taking cabs instead of trudging. She wasn't wearing snow boots.

Others shrugged off the snow as well.

In Herndon, Va., where voters were casting ballots in a special election that was likely to determine control of the state Senate, Earlene Coleman said she felt obligated to make her selection: "It only made sense to come out and do my duty."

Construction worker Tony Cockrell, stopping for coffee at a Hagerstown, Md., gas station, said he planned to continue driving to work sites in western Maryland and northern Virginia to supervise the installation of insulation in building projects.

"If you don't work, you don't get paid," he said, adding that deep cold is good for business. "We're trying to get stuff insulated so it doesn't freeze up."