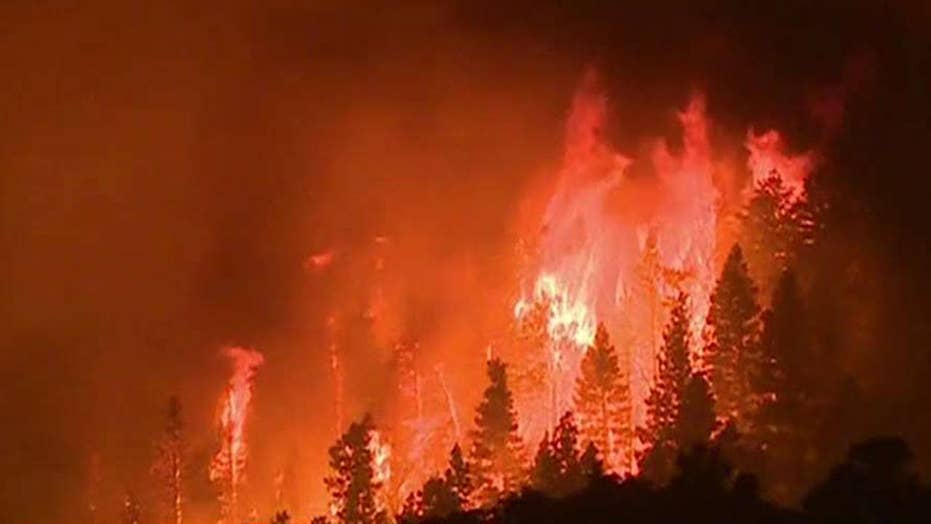 DENVER – Bone-dry conditions and scorching temperatures hampered firefighters Thursday as they battled two wildfires in Colorado — one that has burned structures in the southern part of the state and another that has forced evacuations near Rocky Mountain National Park.

About 350 homes have been evacuated east of Fort Garland in southern Colorado since a wildfire erupted there Wednesday. The blaze has blackened about 6 square miles (15 square kilometers) and has destroyed some structures, but fire managers are not sure how many.

"It's like a fog of smoke right there by our house," resident James Matthews told KKTV. "If the fire does get there, it's going to be very bad because there's propane tanks everywhere."

Many of the evacuations were ordered in Forbes Park, a housing development started by multimillionaire Malcolm Forbes in the 1970s and which is now owned by its homeowners' association.

Roads manager Wade Colvin said Thursday the community consists of about 320 homes, ranging from large houses to cabins, on lots that average about 2 acres (0.8 hectares) each. About 60 of them house full-time residents while the others are used as vacation escapes by people from around the country and world.

Colvin estimated that about 300 people were there when the fire broke out.

Firefighters have not been able to dig any containment lines around the blaze, which is burning in a heavily forested area.

A wildfire in north-central Colorado prompted evacuation orders for residents of about 300 homes outside Rocky Mountain National Park.

According to the Grand County Office of Emergency Management, the fire so far has burned only 5 to 10 acres (2 to 4 hectares), but it is dangerously close to homes.

The fire has not crossed into Rocky Mountain National Park or prompted any road closures, but one trail has been shut down.

Park spokeswoman Kyle Patterson said several fires are burning in the area, and smoke is visible on the west and east sides of the park.

Hot, dry and windy weather has raised the fire danger in Colorado as well as in Utah and parts of Arizona and Nevada. Temperatures reached the upper 90s and triple digits across much of Colorado on Thursday.