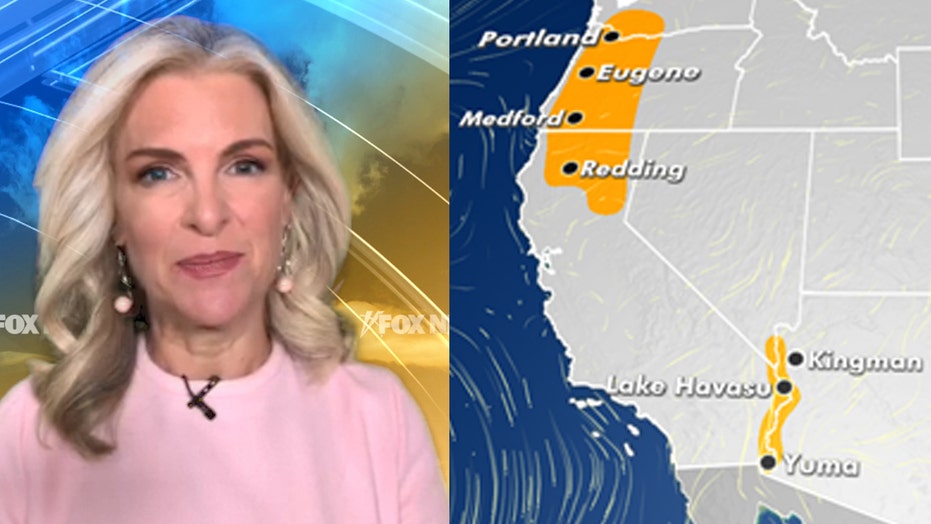 Despite the fact that gusty winds have subsided for the most part over the West Coast, heat and dry conditions on Thursday will once again fuel critical fire weather.

The combination of low humidity, warm temperatures and dry conditions will still cause wildfire concerns, especially for the Northwest.

Red flag warnings remain in effect across the region.

Portions of the Southwest, Northern California and the Northwest will still see hot weather as inland afternoon high temperatures will still reach the 90s and 100s.

Slight improvements continue over the next several days, but there is still no rain in the forecast through the weekend to help firefighters.

In addition to the heat, thick smoke from fires across the West will continue to blanket the region.

This GOES-16 GeoColor satellite image provided by the National Oceanic and Atmospheric Administration (NOAA), shows brown smoke from wildfires blowing westward in the atmosphere from California's Sierra Nevada to the Coast Ranges and from Oregon, top, on Wednesday, Sept. 9, 2020. (NOAA via AP)

Smoke from the Western wildfires is also spreading across the Central and Southern U.S.

The impacts from wildfire smoke will linger across the West. (Fox News)

Worsening drought conditions can be seen out West. (Fox News)

The lack of precipitation in Western states is adding to the ongoing drought across the region.

OREGON FIREFIGHTER TELLS OF WILDFIRE TRAPPING HER, OTHERS: 'WE COULD FEEL THE HEAT'

Elsewhere across the country, the early season winter storm that brought snow, record cold temperatures and gusty winds over parts of the Rockies and Central High Plains is easing up.

Warming temperatures are finally in store for the Denver area after September snowfall. (Fox News)

The blast of arctic air is now starting to moderate and rebound to more seasonal highs Friday through the weekend.

No precipitation is in the forecast across much of the West. (Fox News)

Heavy rain and thunderstorms will be the story along a front that stretches across the Central U.S.

Flash flooding will be a concern for parts of Southern and Central Texas.

Heavy rain will also cause some isolated flooding for the Southeast, MidAtlantic and Northeast throughout the day.