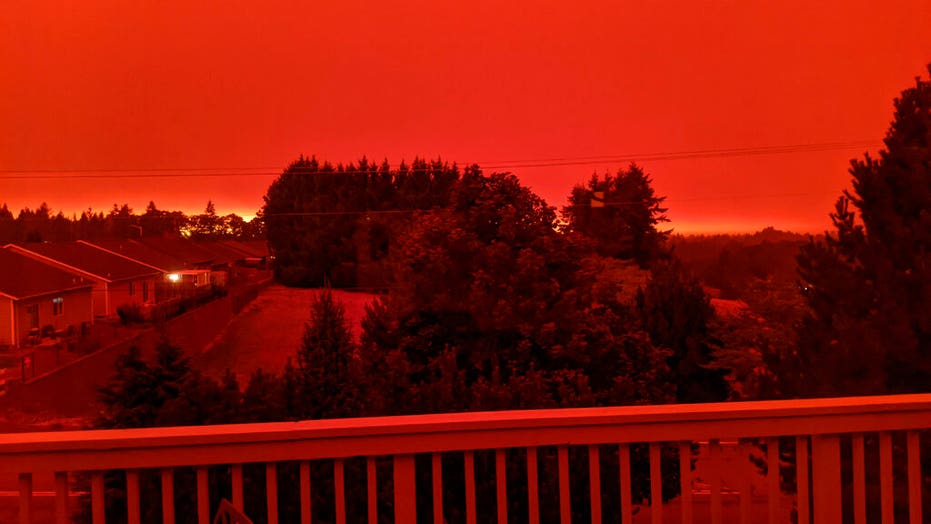 Oregon authorities found at least three people dead Wednesday, including a 12-year-old boy and his grandmother who perished in the family car trying to escape flames, as wildfires raged across the West Coast. And at least deaths were reported in California's Bear Fire.

“For people and families in the evacuation areas, please listen to local calls to evacuate as needed — these lifesaving measures can protect the lives of you and your loved ones, as well as our firefighters,” she said.

A volunteer search party began looking for the boy after he fled his home in Lyons when a wildfire moved in Tuesday afternoon, Portland-based KOIN reported. The child’s mother remains hospitalized in critical condition.

Authorities did not immediately release the victims' identities, but KATU reported the 12-year-old’s name was Wyatte Tofte, citing an interview with his father, Christ Tofte.

The Beachie Creek Fire, also known as the Santiam Fire, engulfed more than 130,000 acres near Lyons, by Wednesday afternoon, according to fire officials. A search-and-rescue party reportedly found Wyatte’s body near the home.

The adjacent Lionshead fire scorched another 105,000 acres just to the east.

And another person was found dead in Berry Creek, Calif., after trying to flee the Bear Fire there, which rapidly grew in size overnight and joined the North Complex Fire, altogether charring more than 250,000 acres with 38 percent containment, authorities said.

That victim was found dead in a car Wednesday morning, Mercury News reported. Authorities said the victim appeared to have driven toward a ditch and attempted to flee on foot before succumbing to the flames.

The Butte County Sheriff's Department said at least three people had died in connection with the fire, according to local reports. The victims' identities were not immediately released.

The sheriff's department has also been urging people to evacuate throughout the day.

Wildfires have engulfed huge swaths of land up and down the West Coast all summer – but California Gov. Gavin Newsom noted Tuesday that “peak” fire season is just beginning.

Under darkened skies from wildfire smoke, a man crosses Hyde Street with Alcatraz Island and Fisherman's Wharf in the background Wednesday, Sept. 9, in San Francisco. The picture was taken in the middle of the day at 12:29 p.m. (AP Photo/Eric Risberg)

The National Oceanic and Atmospheric Administration illustrated the extent of the crisis with satellite imagery posted on Twitter Wednesday morning. It showed smoke billowing up over almost the entire western edge of Oregon.

Harrowing pictures taken up and down the coast show skies with an eerie, otherworldly glow, plumes of smoke and the charred remains of burnt-out structures and woodlands.

In this photo provided by Frederic Larson, the Golden Gate Bridge is seen at 11 a.m. PT, Sept. 9, in San Francisco, amid a smoky, orange hue caused by the ongoing wildfires. (Frederic Larson via AP)

The crisis has strained firefighting and rescue operations, with officials reporting they are stretched thin and faced with a record number of fires.

The uptick also is causing air-quality issues in several states, according to authorities.