A Utah woman was sentenced to nearly 50 years in prison Friday for helping her husband as he killed two Northern California sheriff's deputies in 2014.

Sacramento Superior Court Judge Steve White sentenced Janelle Monroy after jurors last month rejected her argument that she feared her husband Luis Bracamontes would have killed her if she didn't help him.

"Ms. Monroy, you did not start this reign of terror, but you joined in immediately after as an active participant," White said, according to the Sacramento Bee.

Monroy is a U.S. citizen while Bracamontes is a Mexican citizen who repeatedly entered the United States illegally. President Donald Trump has cited his case to illustrate problems with the nation's immigration policy.

Bracamontes has repeatedly said in court that he killed the deputies and wished he had killed more.

The deputies were killed shortly after the couple arrived in Sacramento during what Monroy said was a wandering journey spurred by Bracamontes' drug-infused paranoia.

"I feel like my heart has been ripped out of my chest," Debbie McMahon, Davis’ mother, said.

White rejected arguments from defense attorney Pete Kmeto that Monroy was a battered wife and victim of an abusive, threatening husband, who "was armed to the teeth, raving about killing people" and abused methamphetamine, the Bee reported.

Janelle Monroy listens in court as she is found guilty of murder in Sacramento, Calif., Feb. 15, 2018. (Sacramento Bee via Associated Press)

"She's not the person who killed law enforcement officers," Kmeto said, noting that Monroy never pulled a trigger during the crime spree. "This client is not an evil person, this client has been victimized and has had a tough life."

In opposition, Sacramento prosecutor Rod Norgaard told the judge that Monroy knew before the rampage that her husband wanted to kill police officers, the newspaper reported.

"She did not commit a crime with the devil," Norgaard said. "She married him." 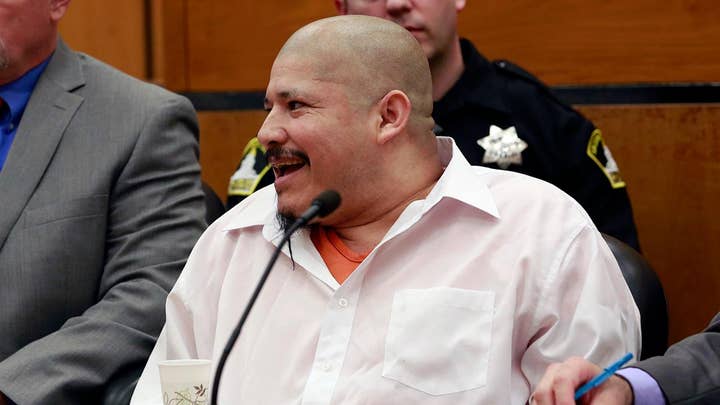 Monroy faced a life sentence after she was convicted of 10 charges including murder, attempted murder and carjacking, attempted carjacking and possessing an assault rifle.

Prosecutors are seeking the death penalty for Bracamontes, who was convicted by a separate jury. Closing arguments in his case are set for Monday.