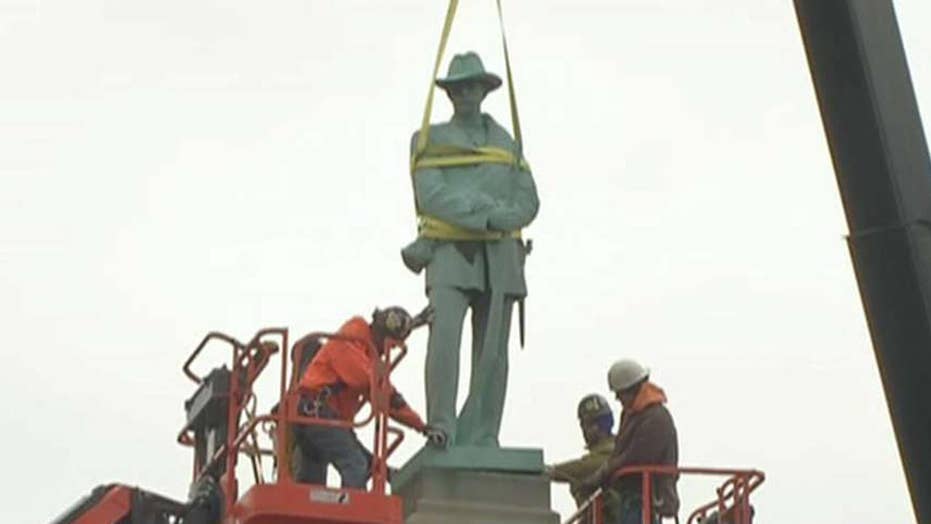 In the wake of the controversial and violent rally in Charlottesville, Va., earlier this month, Christopher Cantwell emerged as one of the leading faces of white nationalism.

Cantwell, 36, surrendered to police Wednesday in Virginia , where he was wanted on felony charges stemming from the controversial demonstration. He was denied bail as a flight risk by a judge Thursday morning.

He appeared via video conference at the hearing. While he did not have an attorney present, he indicated that he had retained a lawyer.

Cantwell was among the white nationalists and alt-right groups who descended on Charlottesville two weeks ago to protest the removal of a Confederate statue. Tragedy struck when police say a Nazi sympathizer plowed his car through a group of counter-protesters, killing a 32-year-old woman.

Cantwell was arrested for incidents not related to the car attack. Here’s a look at who he is, and why he was wanted by police.

In this photo from Aug. 11, 2017, Christopher Cantwell attends a white nationalist rally in Virginia. (Vice News Tonight via AP)

On the night before the deadly demonstrations, white nationalists, neo-Nazis and others marched across the University of Virginia campus with torches and shouted racist chants. Cantwell was among them.

Cantwell was wanted on three felony charges by the police in Lynchburg, Va.: two counts of illegal use of tear gas and one count of malicious bodily injury with a “caustic substance,” explosive or fire.

Cantwell maintained that he pepper-sprayed a demonstrator in an act of self-defense while demonstrating on the college campus.

Emily Gorcenski, a transgender rights activist, told the New York Times that she was standing near Cantwell when he began to pepper-spray counter-protesters on campus. She filed a report with police.

“He sprayed basically the whole group. The whole thing was scary. I was targeted by people wearing swastika pins,” she said. “It was terrifying.”

Cantwell was prominently featured in a Vice News documentary that highlighted “race and terror” in Charlottesville. The video shows Cantwell pepper-spraying “a guy straight in his face as he’s coming toward me,” Cantwell told the New York Times.

WHAT TRUMP HAS SAID ABOUT THE CHARLOTTESVILLE PROTESTS, ATTACK

“I thought that spraying the guy was the least damaging thing I could do,” he said. “In my left hand, I had a flashlight. My other option, other than the pepper spray, was to break this guy’s teeth. OK? And I didn’t want to do that. I just wanted him not to hurt me.”

Cantwell also said in the Vice documentary that the death of Heather Heyer, the woman killed when police said a white Nazi sympathizer mowed down people with his car, was justified. He said the driver of the car was provoked by “stupid animals” who wouldn’t “get out of the way of his car.”

“I think a lot more people are going to die before we’re done here,” he also said.

Cantwell eventually uploaded a video of himself becoming emotional and crying as he discussed the possibility of charges against him.

“I’m armed. I do not want violence with you. I’m terrified. I’m afraid you’re going to kill me, I really am,” Cantwell told police in the nearly five minute long video.

WHAT WE KNOW ABOUT THE CHARLOTTESVILLE CAR ATTACK SUSPECT

Cantwell also cried as he criticized the media for calling the protests “violent” and said demonstrators did “everything in our power to keep this peaceful” even if they “talk a lot of s--t on the Internet.”

“Every step of the way we’ve tried to do the right thing,” Cantwell said.