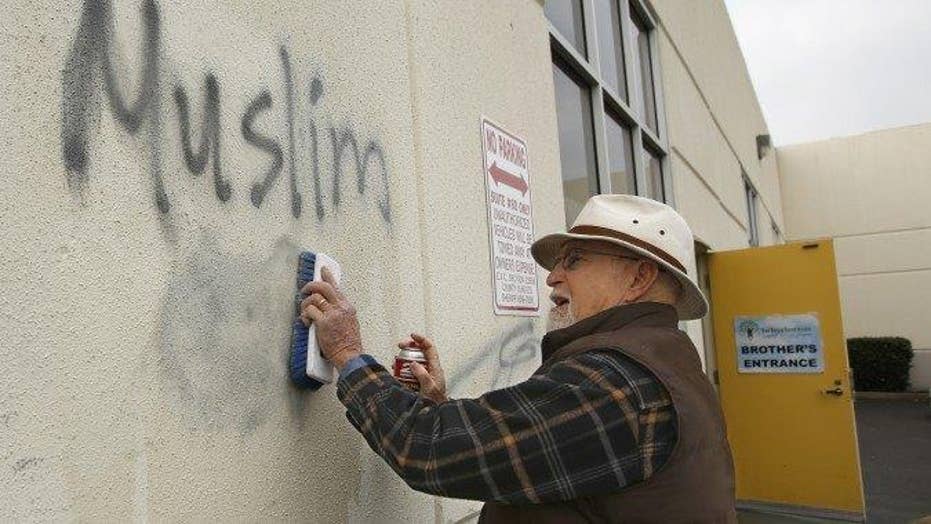 What is fueling imaginary hate crimes?

How today's climate of victimology is playing a role in the rise of hoaxes; Doug McKelway looks into those questions for 'Special Report'

WASHINGTON – Last week, an Indian-owned store in Charlotte, N.C. was set afire, a rock thrown through the window and a racist note left behind. It read, in part: "We need to get rid of Muslims, Indians and all immigrants." It was signed, "White America."

Days later, police arrested a suspect. He was not a white supremacist, nor a Donald Trump supporter, nor Caucasian. He was an African-American man, 32-year-old Curtis Flournoy. Surveillance video showed him lighting the fire.

The FBI does not track fake hate or false flag crimes, making them nearly impossible to quantify. But noted forensic psychiatrist, Park Dietz, an expert witness in one of the most infamous fake-hate crimes of modern times, the Tawana Brawley rape hoax, said they are common.

"There is a large number of cases – certainly dozens or hundreds a year and have been  for at least the past 30 years," he said.

The website, FakeHateCrimes.org documents hundreds of such cases, with new ones occurring almost weekly.

"The motivations are, first of all, they're usually trying to solve some personal problem. The way they try to solve it typically involves their seeking attention for themselves or their appearing to be the victim, because they want the benefits of the victim role," he said.

Exacerbating the prevalence of fake hate crimes – the victimology industry has found favor in contemporary society, especially  on college campuses, where safe spaces, micro-aggressions, and  the demonization of "dominant while male culture" has become common place.

"There was a time in which being a sexual assault victim would be stigmatized and no one would want to go public with it,” Dietz said. “This has shifted so that there are now benefits to being a sexual assault survivor and one evokes considerable support from a fragment of the community by being a victim and a survivor. And so, there’s a perverse incentive that’s been added into the mix."

"This isn’t just my opinion. This is widely recognized now. I would say now 80 percent of the events that happen on campus are hoaxes or pranks," he said.

He adds, "It's a place where consciousness of discrimination, sexism and homophobia is at a peak, and when there's nothing happening, and they need something to happen, they can make it happen."

Corey Saylor, who tracks hate crimes for The Council on American Islamic Relations doesn't dismiss the existence of fake hate crimes but believes they make up a tiny fraction of real hate crimes.

"Across the board,” Saylor said, “we have tracked a spike in hate crimes since particularly the election. So, in the week after the election, we tracked 111 separate incidents that were bias incidents targeting Muslims."

Deitz argues fraying cultural standards contribute to a societal gullibility to reports of hate crimes, no matter how unlikely they may appear to be.

"We have a population less prepared to critically evaluate information they receive," he said. "There was a time in which the institutions that dominated and provided social control were the church and the law and educational systems. But I think that has shifted. All provide the kind of information that aren't subject to scrutiny, that aren't fact-checked, that build on emotion rather than reason, and this results in the dumbing down of the consumer."

One example: An apparent prank pulled by YouTube hoaxster Adam Saleh, as he screamed in Arabic aboard a Delta Airlines, as passengers boarded. He was pulled off the flight for creating a disturbance.

Then, he tweeted: "We got kicked out of a Delta airplane because I spoke Arabic to my mom on the phone..."  It was picked up by the New York Times, USA Today, and the Los Angeles Times as potential evidence of a hate crime.

Despite their huge drain on police resources, fake hate crimes are usually classified as misdemeanors. Dietz believes elevating them to felony status would go a long way to ending them.