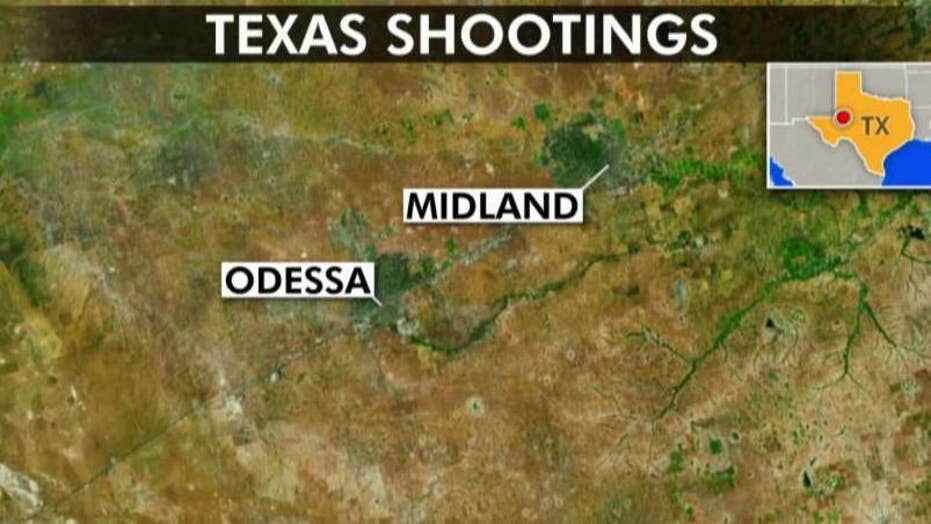 Nineteen other persons were injured as a result of the shooting spree in Odessa and Midland that began after a traffic stop, authorities said. Officers killed the gunman outside a movie theater in Odessa after a pursuit.

Local police would only say that the gunman was a white male in his mid-30s.

A press conference was scheduled for noon local time Sunday.

The Texas Department of Public Safety said the gunman's rampage began when two troopers attempted to stop a gold car on Interstate 20 westbound at 3:13 p.m.

"Prior to the vehicle coming to a complete stop, the male driver (and only occupant in the vehicle) pointed a rifle toward the rear window of his car and fired several shots toward the DPS patrol unit," the DPS said. "The patrol unit was occupied by two troopers, and one was hit by the gunfire."

After the initial shooting, the suspect continued west into Odessa and shot another person on Interstate 20 before driving around the eastern part of the city, where there are multiple crime scenes and victims, the official said. At some point, the subject stole a mail van and committed additional shootings, officials said.

The suspect then traveled back east in the stolen mail truck toward the movie theater, where various law enforcement agencies contacted him. Gunfire was exchanged, and the suspect was killed. 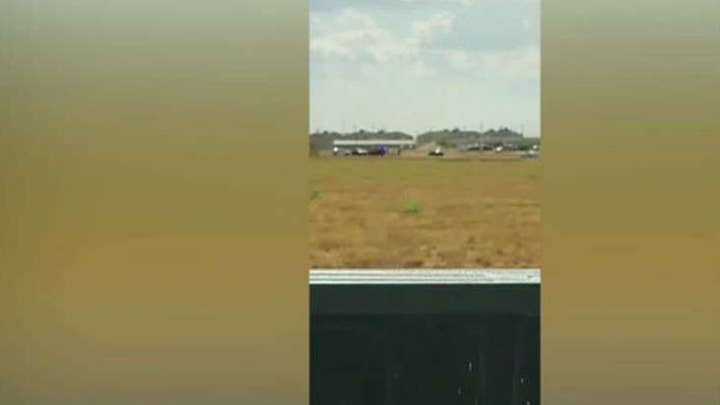 Gerke said he has some idea of who the gunman was.

Medical Center Hospital in Odessa said it received 13 shooting victims, seven of whom were in critical condition. Two others were in serious condition and one patient was deceased. One victim, a 17-month-old child, was airlifted to a level one trauma center in Lubbock, about two hours north of Odessa. The other two victims had been treated and released as of Saturday evening.

Midland Memorial Hospital said it was treating six wounded victims. Three of those victims were in critical condition and three were in stable condition.

"I was born and raised here, I do not recall anything like this ever happening," Midland Mayor Jerry Morales told Fox News. "It's hard to swallow. It's hard to understand. [...] There's a lot of learning going on. It was very rapid."

The suspect's killing brought an end to a chaotic afternoon, during which police initially reported that there were two shooters in two separate vehicles. At a news conference Saturday evening, Gerke said police believe the suspect killed at the movie theater was the only gunman.

The Texas Department of Public Safety (DPS) urged the public to avoid I-20 in Odessa, Midland and Big Spring. Residents of Midland and Odessa were also urged to stay inside.

Dustin Fawcett was sitting in his truck at a Starbucks in Odessa when he heard at least six gunshots ring out less than 50 yards behind him.

At first, he thought it might have been a tire blowing but he heard more shots and spotted a white sedan with a passenger window that had been shattered. That's when he thought, "Oh man, this is a shooting."

Fawcett, 28, an Odessa transportation consultant, "got out to make sure everyone was safe" but found that no one had been struck by the gunfire nearby. He said a little girl was bleeding, but she hadn't been shot, and that he found out she was grazed in the face.

Fawcett said authorities responded quickly and when police pulled out their rifles and vests he knew that "this is not a drive-by. This is something else, this is something bigger."

President Trump was briefed on the shooting and the White House is monitoring the situation, White House Press Secretary Stephanie Grisham said.

Vice President Mike Pence, speaking shortly before departing on a trip to Poland, told reporters: "Our hearts break for the families who have loved ones who've been injured, those who have loved ones who have lost their lives in the wake of this latest mass shooting, and the president and I remain absolutely determined to work with leaders of both parties in the Congress to take such steps so we can address and confront this scourge of mass atrocities in our country."

Pence added that Trump has deployed the federal government in response to the shootings and that the FBI is already assisting local law enforcement.

Texas Gov. Greg Abbott decried what he called a "senseless and cowardly attack."

"The state of Texas and the Department of Public Safety are working closely with local law enforcement to provide resources as needed and deliver justice for this heinous attack," Abbott said in a statement. "I thank the first responders who have acted swiftly and admirably under pressure, and I want to remind all Texans that we will not allow the Lone Star State to be overrun by hatred and violence. We will unite, as Texans always do, to respond to this tragedy.” 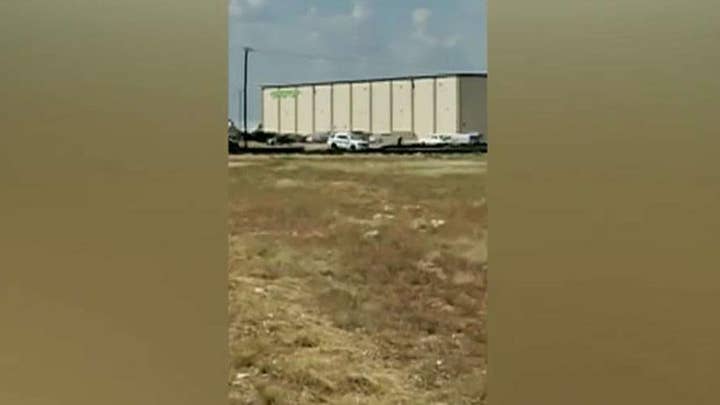 "I am horrified to see such a senseless act terrorize the fine people of the Permian Basin," Texas Attorney General Ken Paxton said in a statement. "Thank you to the courageous local and state first responders who worked quickly today to stop this evil attack. I have asked my law enforcement division and my crime victims services team to assist in any way necessary. Please join Angela and me as we pray for comfort for those who have been impacted by this violent act.”

"Tonight we are one with the entire Midland-Odessa community, especially the victims of this horrific tragedy. I want to thank law enforcement and first responders for their courage in an impossible situation," Sen. John Cornyn, R-Texas, said. "In the face of unspeakable violence, Texans have come together before. We will again."

Texas' other senator, Ted Cruz, said he and his wife Heidi are "heartbroken by this heinous attack."

"We are thankful for the law enforcement officers who heroically risked their lives and acted swiftly to stop the shooter and save others. Their courage helped prevent even more senseless deaths, and we honor their tireless commitment to protecting us all," Cruz said. "We Texans are standing together tonight united against all forms of hatred and violence."

Saturday's shooting came exactly four weeks after a gunman killed 22 people and wounded 24 others at a Walmart in El Paso. The suspect in that massacre reportedly told authorities he was targeting Mexicans. Earlier this week, Abbott held two meetings with lawmakers about how to prevent mass more shootings in Texas.

The University of Texas of the Permian Basin was on lockdown for several hours. The lockdown was lifted at around 6:30 p.m.

Odessa is about 20 miles southwest of Midland. Both cities are more than 300 miles west of Dallas.