Zarif Kelada, center, was put on life support after suffering a heart attack when he confronted two teen robbers. (GoFundMe)

A Washington convenience store clerk was on life support Tuesday after suffering a heart attack Saturday when he confronted two teen robbers that left him to die on the store's floor, authorities said.

The teens -- instead of calling 911 or rendering aid -- returned several times to steal cigarettes and empty the store’s cash register of $178, Angela Sharapova, the store's manager, told Seattle's KOMO-TV.

The clerk, identified as Zarif Kelada, collapsed during a confrontation with the two teens, Auburn police said, according to KOMO-TV.

"It’s absolutely heartbreaking. And we’re just all kind of coping with it – hoping that our guy’s going to make it," Sharapova told the station. 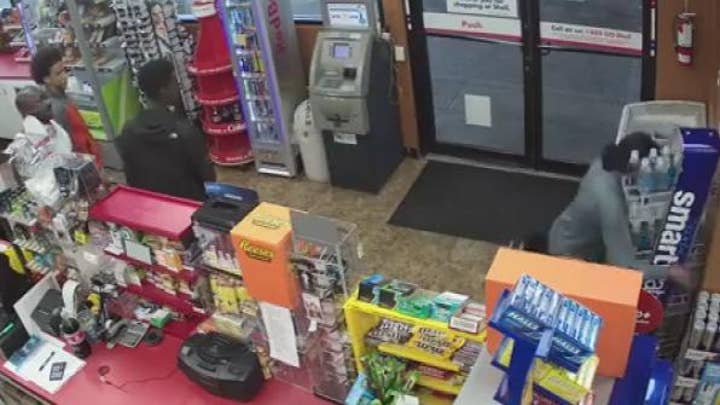 The incident occured in Auburn, which is about 27 miles south of Seattle.

The Saturday evening incident began when an adult man walked in with two teens, police said. One of the teens took a pepperoni stick from the counter and starting eating it, then gave a second one to his friend, police said. Police have identified the man and two teens, Seattle's Q13Fox reported on Tuesday.

When the man tried to purchase a different item, police said the clerk tried to also charge him for the two pepperoni sticks. An argument broke out before one of the teenagers offered the clerk a dollar bill, police said. Kelada, a father of three, circled the counter to confront the teens.

Co-workers told the station that Kelada collapsed moments later after suffering a heart attack. Police called it a medical issue.

“I couldn’t watch it the first time,” Sharapova told Q13Fox. “I had to stop and walk away. It totally broke my heart.”

Investigators said the adult man was not involved in the incident, the station reported.

“This is not something you see very often,” Steve Stocker, Auburn Police commander, told Q13Fox. “It really shocks people and makes people wonder when people can be this cold to other people.”

Another man who works at nearby food truck called 9-1-1 while several customers performed CPR, KOMO-TV reported.

"If you see someone like that, you know, you try to do as much help as you can," the man said.

Co-workers have set up a GoFundMe page to help Kelada with his medical bills.

Police have not yet released the adult man's name. It was not immediately clear if the man and two teens would be charged, according to Q13Fox.