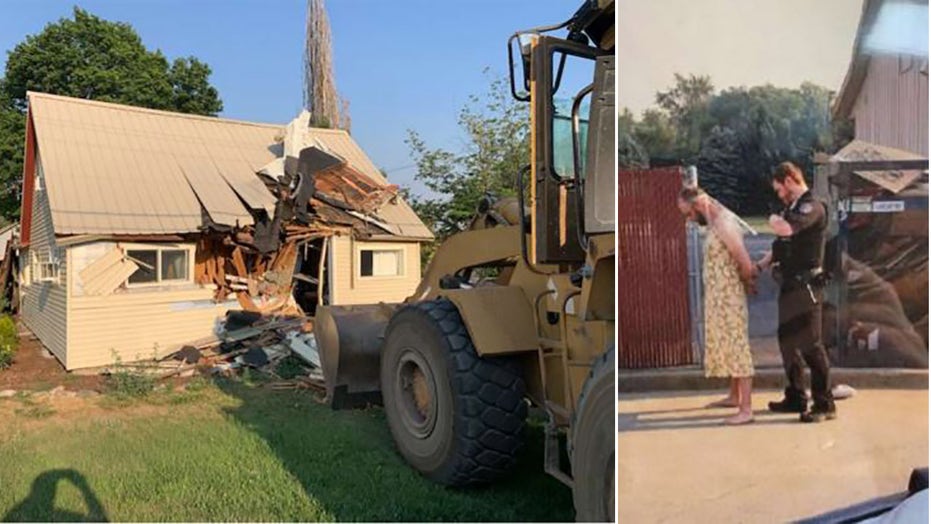 A Washington state man wearing a yellow dress was arrested after he stole a school bus and later drove a front-end loader construction vehicle through the home he shared with his estranged wife, authorities said.

Deputies were first alerted to the man, later identified as 39-year-old Andrew S. Loudon, Saturday night after employees of Osprey Rafting witnessed him driving off in the company’s privately owned large yellow bus, the Chelan County Sheriff’s Office said in a press release.

Responding deputies located the bus and spotted it run through a red light in Monitor. The driver refused to pull over when deputies tried to initiate a traffic stop.

Deputies were forced to give up the chase due to Washington state’s new police reform laws that no longer allow law enforcement to pursue a fleeing vehicle unless there is probable cause that a serious felony occurred, the sheriff’s office said.

Douglas County deputies took up the pursuit through the city limits of Wenatchee but also had to abandon the chase in accordance with the same laws.

On Sunday, the sheriff’s office was notified that the man believed to be the driver had been taken into custody in Chelewah. The suspect appeared to be wearing the same yellow dress.

Police said Loudon had stolen a front-end loader and drove it through his home. When his estranged wife learned her husband may be nearby, she fled the home.

Deputies said Loudon's wife had fled the home when she heard that her estranged husband may be nearby. (Chelan County Sheriff’s Office )

Authorities shared photos that show the heavy equipment sitting in front of his partially collapsed home. It appeared a car was also flipped into the structure.

A car appeared to have been flipped into the Chelewah home. (Chelan County Sheriff’s Office )

Authorities said Loudon had been released Saturday morning from Western State Hospital, a psychiatric facility. He allegedly stole the school bus in Leavenworth and abandoned it near Moses Lake in Grant County before making his way to Spokane and then Chelewah.

Loudon was charged with theft of a motor vehicle, possession of a stolen vehicle, first-degree malicious mischief/domestic violence and attempting to elude a police vehicle.