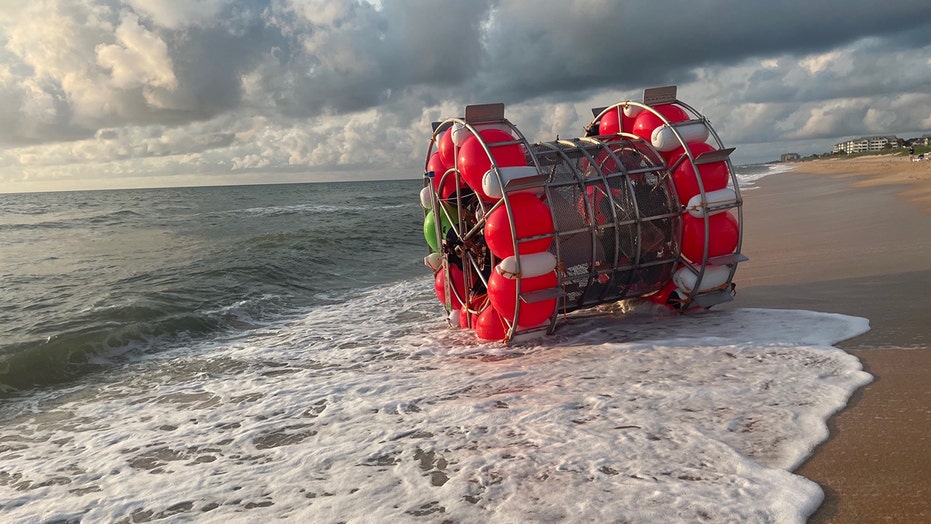 A Florida man washed ashore inside a bubble-like vessel on Saturday morning after an apparent attempt to walk on water.

Flagler County deputies responded to calls from concerned citizens who spotted a strange vessel on the beach in the Hammock area, the Flagler County Sheriff’s Office said. The vessel’s sole occupant was discovered safe inside without any injuries.

He told authorities that he had set off for New York from the St. Augustine area before encountering "complications" that brought him back to shore, the sheriff’s office said.

The seafarer, identified as Reza Baluchi of Central Florida, told FOX35 Orlando he was attempting to run in his floating "bubble" vessel from Florida to Bermuda, or travel north up the coast, to raise money for charity.

The occupant, identified as Reza Baluchi, told FOX35 Orlando that he was making the effort for charity. (Flagler County Sheriff’s Office )

Baluchi has been rescued several times in previous years after setting off inside hydro bubbles, the station reported.

After deputies found the vessel Saturday, the sheriff’s office said that the Coast Guard was called to the scene to take over the case and ensure that the vessel and its occupant met nautical safety standards.