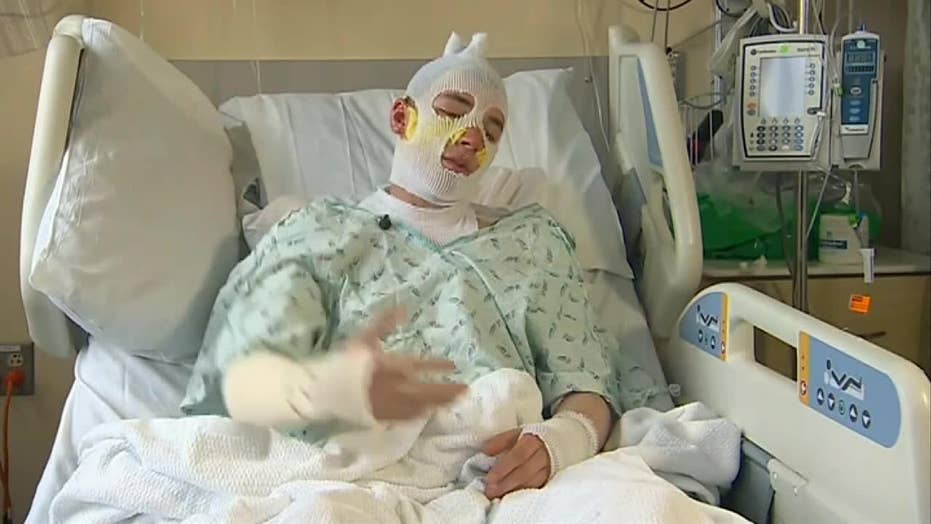 Although he was badly burned, the man said, ''I’d run back in there and do it again."

A Washington man, who has been hospitalized with serious burns all over his body after he rushed into a burning home to save his 8-year-old niece, told reporters from his hospital bed that he would do it again.

Derrick Byrd, 20, of Aberdeen, which is about a two-hour drive from Seattle, told KOMO News, “I’d do it again, I really would.”

He added, “I’d run back in there and do it again even if I got burned worse or died.”

Byrd was airlifted to a nearby hospital with second and third-degree burns on his face, back and arms after the Thursday morning fire in his home, the station reported.

Byrd said when the fire broke out he immediately tried to help his sister get her three young children out of the home through the second-floor window.

“I ran downstairs even though I got burned, started catching the kids,” he said.

Derrick Byrd spoke out from his hospital bed. (KOMO)

Byrd told the station he caught his 6-year-old nephew and his sister’s baby but her 8-year-old daughter, Mercedes, was too afraid to jump.

He said when his sister fell off the roof, Mercedes fell back into the burning room.

He said he ran upstairs, “pushed right through the fire” all while he could feel it burning him.

FIRE AT JIM BEAM KENTUCKY WAREHOUSE CONTINUES TO BURN AS 45,000 BARRELS OF BOURBON ARE DESTROYED:REPORTS

“Then, I got her, I took my shirt off and put it around her face so she wasn’t breathing any smoke and then I just carried her out, as fast as I could,” Byrd told the television station.

He added, “Even though I got burned, I really didn’t care though. I’d rather me get burned than her. She’s young, you know. She’s still got a lot of stuff going for her. She’s a good kid.”

When asked what his reaction was to people calling him a “hero” Byrd told the station, “I can’t say a hero. I just say I care for my niece and nephew. I wasn’t going to let them die.”

The house appeared to be a total loss and firefighters reportedly were just thankful nobody died.

The cause of the fire remained under investigation.