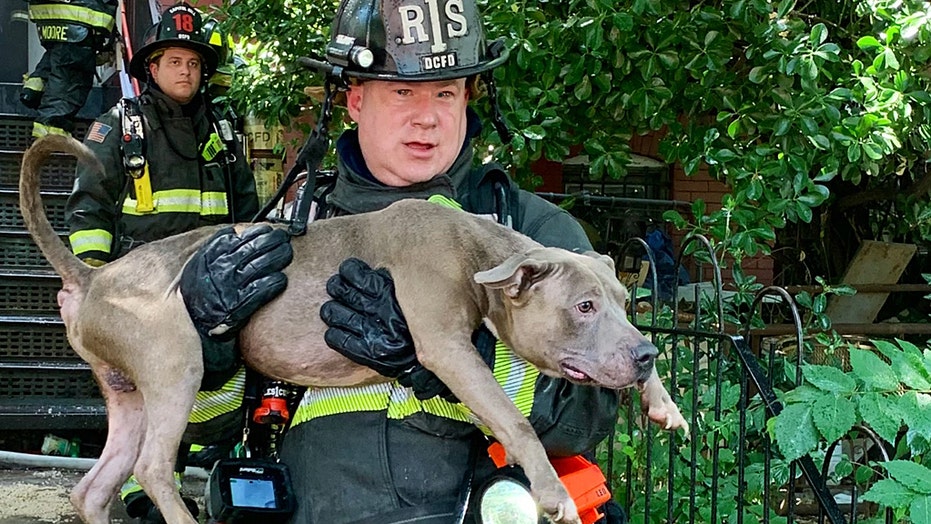 Six dogs were rescued from a burning home in Washington Tuesday, as sweltering summer heat blanketed the nation's capital.

DC Fire and EMS officials said the blaze broke out at a home on K Street in Northwest D.C.

Among the challenges of fighting the blaze, firefighters faced “intense heat” and “cluttered” conditions while rescuing animals and people.

Six dogs were rescued from a burning home during the intense heat wave in Washington D.C. on Tuesday. (DC Fire and EMS)

"Firefighting is a hot business under any conditions, but is even worse with air temperatures around 100," rescue officials tweeted.

Six dogs were rescued from a burning home during the intense heat wave in Washington, D.C. Tuesday. (DC Fire and EMS)

The deputy mayor for Health and Human Services in Washington said a heat emergency was issued Tuesday due to a projected heat index of 103 degrees.

As fire crews fought the blaze, they also pulled the dogs from the building one by one.

"Despite intense heat of the day & clutter conditions inside, #DCsBravest have brought the fire under control and rescued several dogs from home who are being given treatment," the unit tweeted.

Videos released by the fire department showed crews tending to the dogs, giving them water and oxygen while trying to cool them off.

One dog was found unconscious was treated and revived at the scene by fire crews, according to WUSA-TV.

No other injuries were reported.

Officials said four residents along with the six dogs were displaced as a result of the fire. There were no working smoke detectors in the home.

"If this blaze took place at night, the results could have been tragic," the agency tweeted. "Fire burns fast, and WORKING smoke alarms give you those precious seconds to safely escape a burning home."