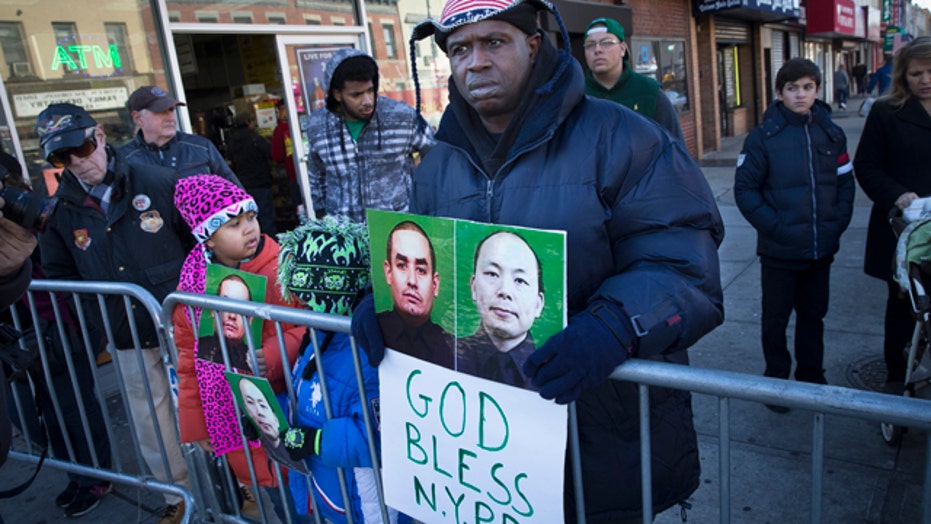 Hundreds of uniformed officers joined the wife and two sons of a New York policeman who was gunned down in broad daylight at a wake Friday.

The tribute to Officer Rafael Ramos took place at a Queens church were friends and colleagues spoke highly of him. Ramos was seen as the embodiment of selflessness and the kind of officer the New York Police Department wants its officers to project.

"He was studying to be a pastor. He had Bible study books in his locker, which is rare for a police officer, but that goes to show you the type of man he was," NYPD Capt. Sergio Centa said before entering Christ Tabernacle Church.

Ramos was dressed in his full uniform in an open casket. His funeral Saturday is expected to be attended by Vice President Biden and Mayor Bill de Blasio.

Police union officials have criticized de Blasio, saying he contributed to a climate of mistrust toward police amid protests over the deaths of black men at the hands of white officers. Union officials have said the mayor's response, including his mention of how he often fears for the safety of his biracial son in his interactions with police, helped set the stage for the killings.

But de Blasio, who has praised officers for their service both before and amid the protests, has stood solidly behind the department since the Dec. 20 slayings of Ramos and Officer Wenjian Liu as they sat in their patrol car on a Brooklyn street. The shooter, Ismaaiyl Brinsley, later killed himself.

De Blasio temporarily called for a halt to demonstrations against police officers in the wake of grand juries in New York and Missouri declining to indict white police officers in killings of unarmed black men. He denounced as "divisive" a demonstration that took place anyway and on Thursday tweeted a thank you to police for arresting a man accused of threatening to kill officers. Still, on Friday an airplane hauling a banner insulting the mayor organized by a former police officer-turned-activist flew above New York City.

Pastor Ralph Castillo said Ramos was a beloved member of the church.

"Whether he was helping a mom with a carriage or bringing someone to their seats, he did it with so much love and so much vigor and so much joy," Castillo said.ork and Missouri declining to indict white officers in deaths of black men.

Mourners gathered in the streets to hear the eulogies. Ramos was a long-standing member of the church and served as an usher.

"We feel sorry for the family, and nobody deserves to die like this," said fellow churchgoer Hilda Kiefer as she waited to enter the wake.

His compassion was in contrast to the emotionally disturbed loner who killed the officers.

Investigators say Brinsley started his rampage by shooting and wounding an ex-girlfriend in Baltimore. He also posted online threats to police and made references to high-profile cases of unarmed black men killed by white officers.

Liu’s funeral arrangements have not been announced.

The life The Silver Shield Foundation, a charity founded by the late New York Yankees owner George Steinbrenner, has set aside $40,000 for the education of Ramos' sons. Bowdoin College said it will cover Ramos' older son's education costs as long as he remains a student there.

The Stephen Siller Tunnel to Towers Foundation, a charity created after 9/11, says it will pay off the home mortgages of the two slain officers.

Meanwhile, Centa said he's instructed officers at the 84th Precinct where Ramos and Liu worked to be vigilant on patrol.

"Things we took for granted maybe a week or two ago we can't take for granted anymore," Centa said. "You may be in your car and see someone walking up the street toward you. You have to be prepared. You never know. It's a scary time for the police department right now" long Brooklyn resident joined the NYPD in 2012 after working as a school security officer.