A 33-year-old California man was arrested this week after a number of people were attacked during a rally held in support of President Trump.

Tense moments captured on video at the Aliso Viejo event on Wednesday show opposing sides appearing to square off in an armed confrontation.

Deputies were sent to Aliso Creek Road and Pacific Park Drive about 6:30 p.m. PT, and the Orange County Sheriff’s Department told KTLA that five separate 911 calls were made.

The fracas concluded when a retired police officer pulled a gun on the alleged attacker, Alvin Shaw, who the department's Sgt. Dennis Breckner said had pulled out a small pocket knife. Shaw is accused of assaulting three women aged 55, 74, and 84.

A knife was later recovered from the bushes by deputies, where witnesses reported seeing it thrown.

CBS Los Angeles reported Thursday that one person was knocked to the ground by Shaw while trying to help others and another was taken to a local hospital with a neck injury.

Witnesses told KTLA that Shaw "came out of nowhere" as the two-hour event was winding down, and that they had thought he was going to join them.

“Instead, he was pretty upset and he started using profanity from the minute he arrived,” Cynthia Cantrelle-Westman said. “He kept coming over to me and getting in my face.” 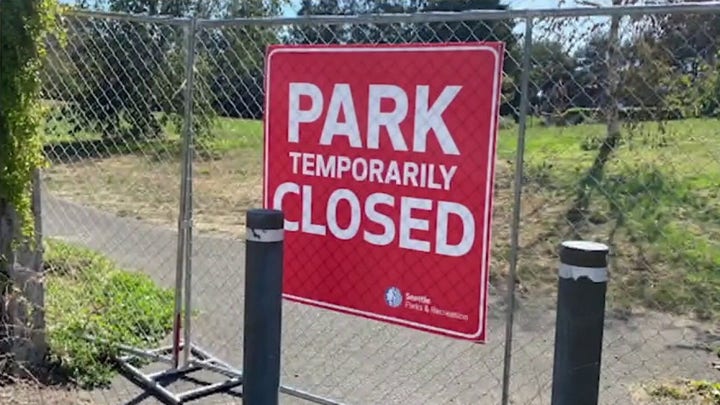 Others reported Shaw had blown smoke in the faces of attendees before he punched several women, including 84-year-old Donna Snow.

Snow said Shaw struck her in the face after he tried to put his cigar out on her Trump sign, and she asked him not to.

Shaw was taken into custody on suspicion of assault with a deadly weapon, elderly abuse and assault, and battery. He was released Thursday after posting bail.

“This could have been a very serious incident,” Breckner said. “In this case, this was just two groups that disagree, and while we support people and their using their First Amendment rights to put out their message, we prefer that they remain peaceful.”