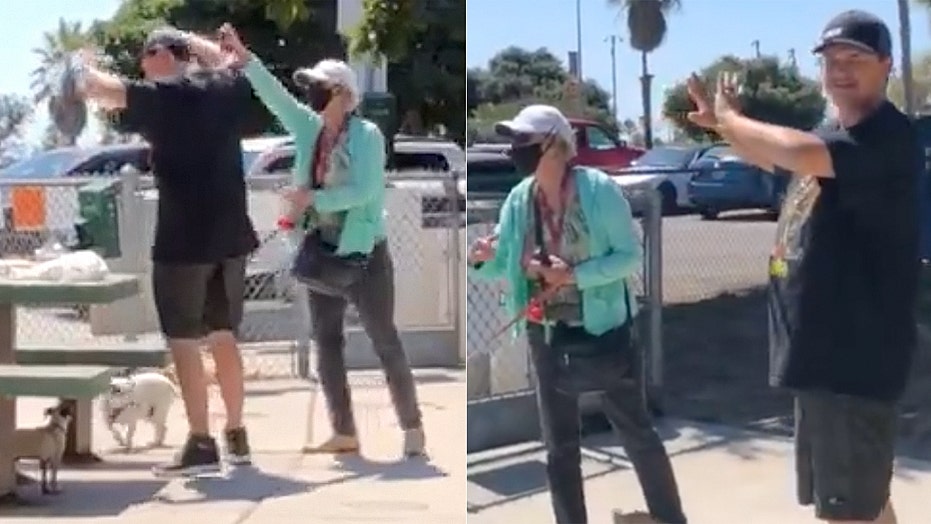 A woman has posted a video of a stranger attacking her husband with pepper spray for allegedly not wearing a coronavirus mask at a San Diego dog park while having lunch.

“That is me crying hysterically in the background because my innocent husband just got maced for no reason,” Ash O’Brien says in a Facebook post that includes the cellphone video.

O’Brien told KGTV the incident took place Thursday afternoon at the Dusty Rhodes Dog Park in San Diego. They had brought their pug puppy to the park. She said the person who had the pepper spray was a woman wearing a face mask who was at the park with her dog.

“Automatically started saying stuff, us not wearing a mask when we were social distancing,” she told the station. “There was no one near us. Wherever it’s required we wear it.”

Images from cellphone video show the husband of Ash O'Brien being attacked with pepper spray by a woman at a dog park in San Diego. O'Brien said the woman was angry she and her husband were not wearing coronvirus masks (Ash Sherilynn O'Brien)

O’Brien said the pepper sprayer was also angry they were eating in the park. She said they didn’t know there was a park ordinance prohibiting food.

O’Brien told the station that after going to the hospital, they went to the police station to file a complaint accusing the woman of assault.

“I want her to go to jail when she assaulted my husband and I’m angry about it,” she said.