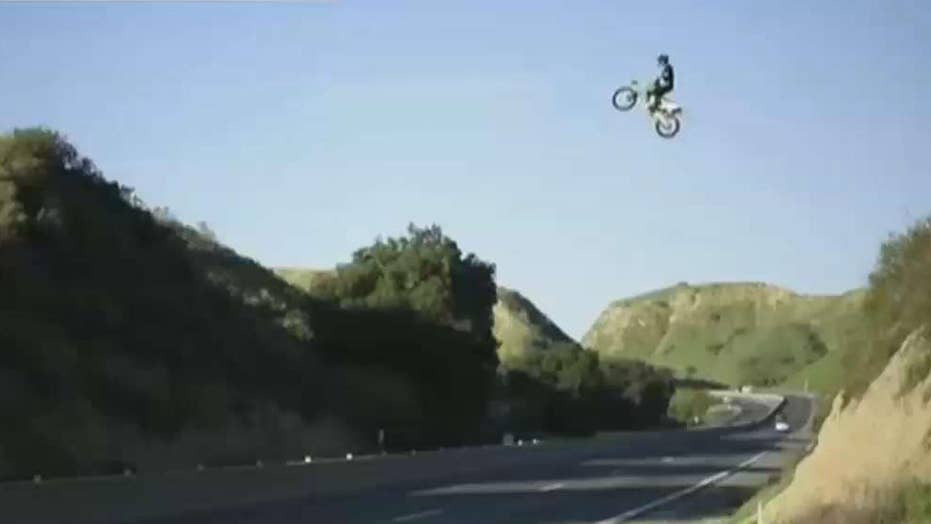 Dirt bike jumps over the freeway

A dangerous Southern California dirt bike stunt near a freeway caught the attention of the authorities.

A video posted on Kyle Katsandris’ Instagram account shows a dirt bike launching over cars traveling on the 60 Freeway in Moreno Valley. The mind-blowing footage showed the biker launching off a hill on one side above the freeway and landing the jump on the other side.

The stunt might have been seen as a success, but the biker and the group could be in for some legal trouble.

CBS Los Angeles reported Friday that the California Highway Patrol and the Riverside County Sheriff’s Department were investigating the video.

It’s unclear what charges the stuntmen could be facing. But a friend of Katsandris said the jump was not as daring as people think. The friend told CBS Los Angeles that Katsandris is an experienced rider and the stunt only looks more difficult because of where the biker pulled it off.

One person wondered what would have happened if the stunt went wrong.

“Becoming a threat to other people as well. Not only to himself. It’s not only about his injuries, it’s about other people,” the person told the station.