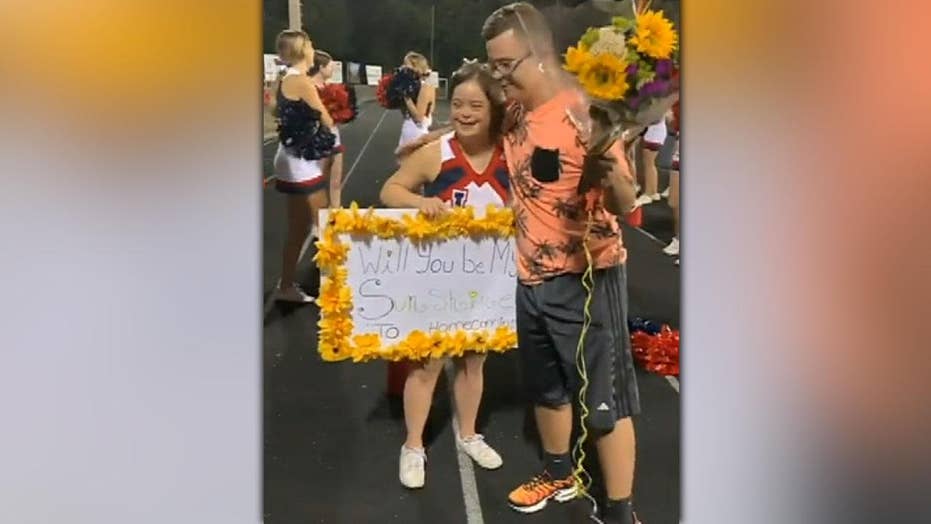 Video captured the sweet moment when a Florida teenager asked his longtime girlfriend, who both have Down syndrome, to homecoming on Thursday.

David Matthew Cowan, a senior at Seminole High School asked his girlfriend Saris Marie Garcia, a junior and cheerleader at Lake Brantley High School in Altamonte Springs, which is about nine miles from Orlando, Fla., to homecoming on Thursday. The couple attended the event together on Saturday night.

Wanda Cruz, Garcia’s mother, told Fox News she was there when Cowan asked her daughter to homecoming and took the video.

Video captured the sweet moment when a Florida teenager, David Matthew Cowan, asked his long-time girlfriend, Saris Marie Garcia, who both have Down syndrome, to homecoming on Thursday. (Instagram/saris.marie.model)

Cowan arranged his homecoming surprise proposal to take place during Thursday night’s high school football game, where his girlfriend was cheerleading with her squad.

The video, which has garnered nearly 3 million views on Facebook and more than 140,800 views on Instagram, shows Cowan, 19, walking up to Garcia, 18, with balloons, flowers and a sign that said, "Will you be my sunshine to homecoming?"

In the video, Garcia is heard saying, “Yes” when Cowan asked her to homecoming, he then raises his arms in the air in victory. The two are seen hugging and smiling in the video as the crowd clapped and cheered.

“That’s how they are. They are always so genuine and sweet and happy together,” Cruz told Fox News.

She said she never thought the video would go viral.

Cowan and Garcia went to homecoming together on Saturday night.  (Instagram/saris.marie.model)

“It feels amazing to share this story and also to see the impact on other families [with children with Down syndrome], how they feel inspired and it shows them they can have a fulfilling life,”she said.

Cruz said she is extremely grateful for the opportunities of inclusion in their schools and the fact that her daughter and Cowan could go to homecoming together.

She told Fox News that Garcia and Cowan have known each other since they were both 3 years old. She said they met while taking speech therapy in Orlando. Cowan's family moved to Miami and, months later, so did Garcia's --where the teens ended up in the same private school together for two years. They stayed friends and eventually both families moved back to Central Florida. When they were 14 years old Cowan and Garcia stared dating, Cruz said.

“They’ve always been together. It’s just so cute how their relationship progressed and blossomed,” Cruz said.

She said she was not at the homecoming dance but, Cowan’s sister, who is a year younger than him, was the official chaperone on Saturday night and videotaped a special moment.

“The sweetest thing was when the principal brought them to the stage and introduced them to the school as a special couple, and the crowd went wild. They were just jumping and screaming and cheering for them. It was so cute,” Cruz said.

Garcia and Cowan have known each other since they were both three and started dating when they were 14.  (Instagram/saris.marie.model)

She told Fox News Cowan’s sister showed her the video.

“I was with David Matthew Cowan’s mom, Marilyn, and we both broke down in tears. We had happy tears. It meant the world to us. It really touched our hearts,” Cruz said.

“They had a lot of fun. They danced the whole night,” She added.