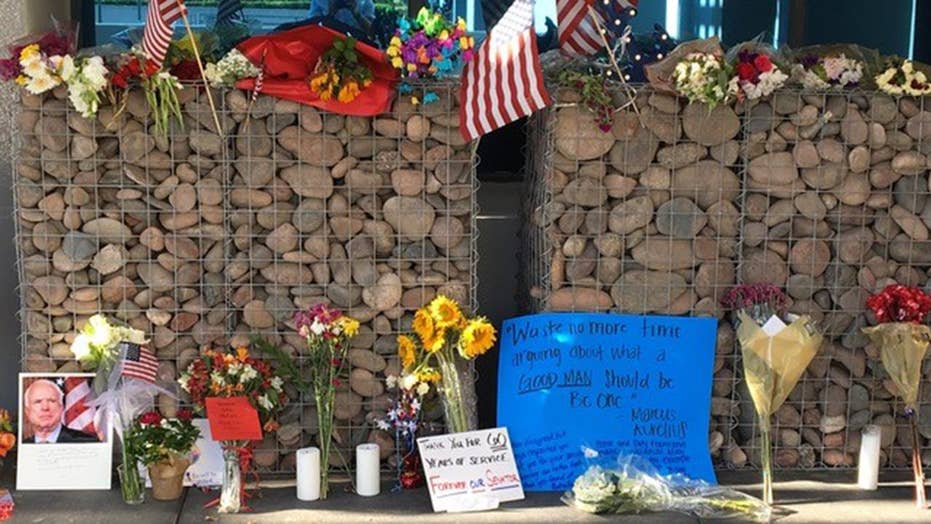 A former US Navy officer, Arizonans, and a former Vietnamese marine honor Sen. McCain in a special way.

PHOENIX – John McCain was honored over the weekend with coast-to-coast
memorials -- which included hand-written letters, flowers and American flags – in remembrance of the late senator’s work.

One memorial, outside McCain’s Phoenix office, included a sail to represent his service in the U.S. Navy.

One sign there read: “Thank you for 60 years of service. Forever our senator.”

Jim Remington, a former U.S. Navy officer who served for 23 years, happened to be in Arizona visiting another Navy friend and decided to stop by the memorial on Sunday evening. Remington says many men and women in the military have respect and appreciation for Sen. McCain.

“He not only served our country, but he endured some of the most unspeakable torture that anyone could and endured that for his country — didn’t leave when he could’ve left earlier,” Remington said. “He put country before self…the list of people who could do that is pretty short. And the fact that decades later, he was monumental in the movement to strike peace with the people who tortured him and were his captors is a testament to the greatness of the man and rising to the occasion.”

Dozens of Arizonans showed up Sunday night for a candlelight vigil hosted by a local Vietnamese group in front of the memorial. One of the vigil attendees, Hung Nguyen, was a former Vietnamese Marine who considered McCain a friend. Nguyen says McCain “put America first.” Nguyen moved to Arizona in 1985 and says he first met McCain around 1992 and always helped the Vietnam community.

Sylvia Bustos also attended the vigil and brought a flower, angel figurine and a candle to pay her respects.

“I grew up in Arizona and I followed his career all the way through—he was an American hero,” Sylvia Bustos said. (Fox News)

“I grew up in Arizona and I followed his career all the way through — he was an American hero,” Bustos said.

“I’m moved and I’m glad that in such a deeply divided political time as we are right now — to see so much of the spirit of John McCain in the response that we’re seeing now — the bipartisanship,” Remington said. “The people coming together, there’s a sign up there on some of the flowers…I think that that sentiment really captures how many people felt about John McCain and I’m happy to see the outpouring of those sentiments.”

That sign at the memorial read: “Often disagreed, but always respected you. Thank you for your service and leaving our nation better than you found it.”

Senator McCain once said at the 2004 Republican National Convention: “Let us argue our differences. But remember we are not enemies, but comrades in a war against a real enemy, and take courage from the knowledge that our military superiority is matched only by the superiority of our ideals, and our unconquerable love for them.”

There was also a portrait of McCain that had a hand-written note at the memorial saying: “Thank you Senator McCain for all your years of tireless service to our country and Arizona. Your courage and dedication will never be forgotten. Rest in peace, sir, and God speed.”