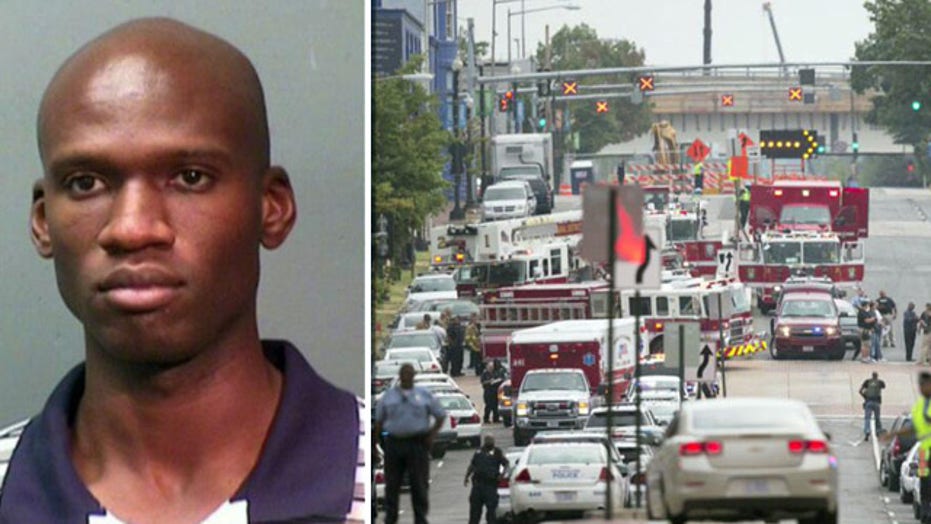 Inside the mind of Navy Yard shooter Aaron Alexis

Aaron Alexis, the Navy vet suspected in the killing of 12 people at Washington’s Navy Yard, had a troubled past that included two previous arrests involving shootings and a "history of misconduct" in the Navy.

Alexis, who friends described as a convert to Buddhism, was arrested in Fort Worth in 2010 after firing a gun into his neighbor's apartment, leaving her "terrified," according to a police report.

In addition, he was arrested in 2004 in Seattle for shooting out the tires of a construction worker's car in an incident he later described as "an anger-fueled blackout."

He also told Seattle police he had witnessed the Sep. 11, 2001 terrorist attack and "how these events had disturbed him," according to a police report.

Alexis' father told police in 2004 his son had participated in rescue efforts during 9/11 and had suffered post traumatic stress disorder. This could not be independently confirmed.

A former neighbor of Alexis' family in Queens, N.Y. told Fox News, "I'm shocked and appalled. My heart goes out to those families. I guess you never know who lives next to you."

She said he seemed like a typical, polite boy when he and his siblings lived with their mother in the Flushing neighborhood.

Gene Demby, of Philadelphia, who said he dated one of Alexis' younger sisters at the time, told the Associated Press Alexis and his two younger sisters had a difficult relationship with their father, who divorced their mother in the mid-1990s.

"I wouldn't call him nice, but he seemed harmless, if really awkward," said Demby, the lead writer for NPR's Code Switch blog about race and culture. "He was insecure. He was like a barbershop conspiracy theorist, the kind of guy who believes he's smarter than everyone else. He also was kind of like perpetually aggrieved, but not megalomaniacal or delusional."

Hewlett Packard issued a statement Monday night saying that at the time of the shootings, Alexis worked for The Experts, a subcontractor on an HP Enterprise Services contract to refresh equipment used on the Navy Marine Corps Intranet network.

Embry-Riddle Aeronautical University, which offers online courses in aviation and aerospace, confirmed that Alexis was enrolled as an online student via its Fort Worth campus, started classes in July 2012 and was pursuing a bachelor's of science in aeronautics.

"We are cooperating fully with investigating officials," the university said.

Fox News has learned from a source familiar with the investigation that they are searching Alexis' social media footprint. So far, they have found no presence associated with the shooter on Facebook or Twitter and a LinkedIn account, which showed his biographical data as a reservist, was deleted shortly before his name became public.

Alexis, 34, who died in a firefight with police, was a former aviation electrician’s mate who once won a Global War on Terrorism Service Medal, according to Navy biographical data.

Officials said Monday there were no indications he was connected to terrorism, though his name was being run through various databases maintained by the Department of Homeland Security and National Counterterrorism Center.

In December 2009, an Amazon user named "Aaron Alexis" added eight items to his wish list, including cartridges, a pistol and a rifle, Fox News confirmed.

Alexis' biographical data from the Navy gave his home of record as New York City. He enlisted May 5, 2007 and was an aviation electrician’s mate 3rd class/AE3.He spent time in Texas and Illinois before leaving the service in January 2011.

It was not immediately clear why he left or whether he was voluntarily discharged. A senior defense official told Fox News he had a "history of misconduct."

While in the Navy, he was awarded the National Defense Service Medal and Global War on Terrorism Service Medal.

After leaving the reserves, Alexis worked as a waiter and delivery driver at the Happy Bowl Thai restaurant in White Settlement, a suburb of Fort Worth, Afton Bradley, a former co-worker, told the Associated Press. The two overlapped for about eight months before Alexis left in May, Bradley said.

Having traveled to Thailand, Alexis learned some Thai and could speak to Thai customers in their native language.

"He was a very nice person," Bradley said in a phone interview. "It kind of blows my mind away. I wouldn't think anything bad at all."

A former acquaintance, Oui Suthametewakul, said Alexis lived with him and his wife from August 2012 to May 2013 in Fort Worth, but that they had to part ways because he wasn't paying his bills. Alexis was a "nice guy," Suthametewakul said, though he sometimes carried a gun and would frequently complain about being the victim of discrimination.

Suthametewakul said Alexis had converted to Buddhism and prayed at a local Buddhist temple.

"We are all shocked. We are nonviolent. Aaron was a very good practitioner of Buddhism. He could chant better than even some of the Thai congregants," said Ty Thairintr, a congregant at Wat Budsaya, a Buddhist temple in Fort Worth.

Thairintr said Alexis told him he was upset with the Navy because "he thought he never got a promotion because of the color of his skin. He hated his commander."

As Thairintr and others at the temple understood, Alexis took a job as a contractor and he indicated to them he was going to go to Virginia. He last saw him five weeks ago.

"He was a very devoted Buddhist. There was no tell-tale sign of this behavior," Thairintr said.

In the Fort Worth incident in 2010, a woman who lived above Alexis reported she was sitting in a chair when she heard a loud pop and saw smoke and dust along with a hole in her floor only feet from where she was sitting, according to police report. She also said Aaron had recently confronted her in the parking lot about making too much noise.

The responding officer said she was "terrified" of Alexis. He told the officer he had been cleaning his gun when it went off.

According to the Seattle case summary report, on May 6, 2004, Alexis fired three rounds from a Glock 30 .45 caliber pistol at a car belonging to construction workers building a new residence next to his home, damaging both rear tires and wheels. The owner of the car told police that “neither prior provocation nor words were exchanged between he and Alexis.”

An FBI press release asked anyone with any information about Alexis to contact them immediately.