The bodycam footage of Uvalde police officers show a chaotic scene after law enforcement personnel responded to the mass shooting at Robb Elementary School in Texas on May 24, 2022.

The bodycam footage of a Uvalde police officer who responded to the mass shooting at Robb Elementary School in Uvalde, Texas has been released, showing the officers gathering together outside the school despite hearing shots coming from inside the building.

The newly released footage begins with at least two officers walking outside the school with one officer warning the other the gunman "could be" inside the school.

"Shots fired, shots fired," the officer can be heard shouting as he is seen running into an entrance of the school. "Shots fired from inside the building," he echoed in the footage.

As the officer is running, a dispatch can be heard saying a female victim was found shot in the head. It is not immediately clear who the dispatch was referencing but the gunman’s grandmother, Celia Gonzales, 66, was shot in the face at her home prior to the school shooting.

She survived and was later released from the hospital. Her home was less than a mile from the school.

"Shots fired from the building, Uvalde," the officer wearing the camera radioed in to dispatch as he entered the school, the video showed.

"Which building?" the dispatch can be heard asking, but the response went unanswered.

Moments later, the officer approaches at least three other officers when additional shots can be heard.

"Take cover guys," the officer can be heard saying as the video shows several officers with readied weapons.

The officers spread down the hall after half a dozen shots were heard.

"Are you ok? Are you hit?" an officer can be heard shouting before the officer wearing the bodycam exited the door he just entered.

The footage then shows a lengthy rescue attempt of officers outside the school approaching classroom windows, breaking them, and pulling the children to safety.

"It’s ok guys, we have him contained," the officer wearing the cam can be heard saying. "He’s in the building on the West side of the property," he added. "I have a male subject with an AR," he said on his radio as he and another officer remained outside, but near the school.

The officer radios in for backup, including a request for a helicopter above the school, ballistic shields, and flash bangs.

"The male subject is in the school," the officer said. "We have multiple officers inside the school and we believe he [the suspect] is barricaded in one of the offices but he is still shooting."

At least twenty minutes pass, then the officers approach the window of a classroom and start pulling several children out of the building, the video showed.

After clearing the first room, the officers approach the next window and wait several minutes to make sure the shooter is away from the classroom.

"We need to get these kids out of here. They are scared, man," the officers standing outside the school said. "I know, I know," another officer responded.

The officers then begin assisting the children, several of whom thank the officers. The teacher was the last person helped from the room.

In the video, the officers repeatedly expressed confusion about where the shooter is and whether students were inside all the classrooms.

"We don’t know," an officer said in the video. "They won’t come to the window. We have to get them out forcefully but there have to be kids everywhere."

"Where is he?" an officer asked as they approached another window. "He’s on the other side. He’s contained but he can still shoot through," another responded.

The footage showed the officers break the window with a baton as one officer is seen pointing a rifle inside. They found children inside, informed them they were the police, and instructed them to open the window further.

"Open the window," the officers are repeatedly shouting. "Hurry sweetheart," another said as a girl can be heard crying.

More than a dozen officers can be seen in the footage standing outside the building. 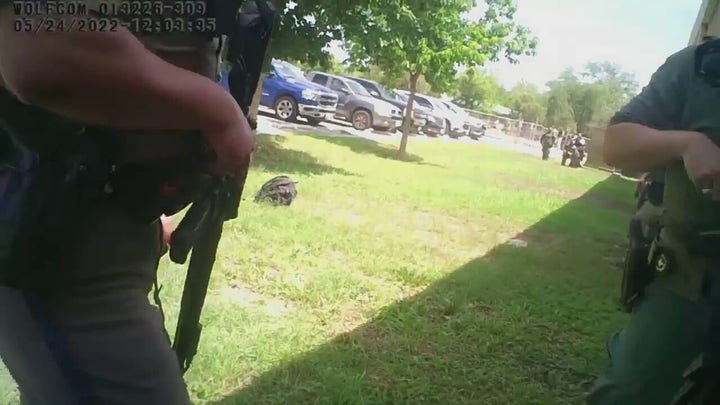 After nearly 30 minutes, the officer wearing the camera returns inside the school.

The officer walked through the classroom, checking for survivors as an officer on the police radio can be heard saying they had shields on site. Several more officers are seen pouring into the school, with shields and with rifles, from different departments.

After finding more students inside one of the classrooms, the officers struggle to open the door. They first used a knife to try and pry the lock, then a second knife, but were unsuccessful.

After another officer suggested they break through the glass, the officer said it was impossible and that they would need a breeching tool.

The officers discuss other possible options before calling out to the shooter.

"Sir, if you can hear me, please put your gun down. We do not want anyone else hurt," the officer can be heard shouting. Another officer suggests repeating the command in Spanish, and the officer complies, shouting the message again in Spanish. 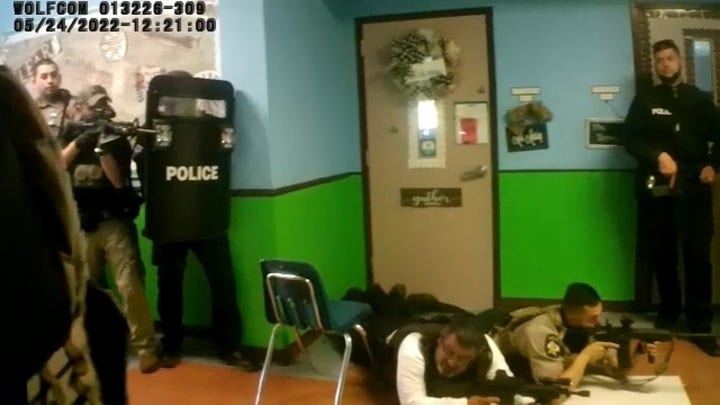 Several minutes passed, then another group of officers is heard down the hall breaching a room and rescuing a teacher. "Are you shot? Are you shot?" the officers ask her, as she tells them the shooter is in the classroom. The teacher is not seen in the footage.

Law enforcement personnel run away from the scene of a suspected shooting near Robb Elementary School in Uvalde, Texas, U.S. May 24, 2022. (Reuters/Marco Bello  )

The officers discussed getting a flashbang and other options to clear the rooms adjacent to where they believed the shooter was barricaded.

An hour has passed in the footage since the officer first heard gunshots. The bodycam footage then cuts to black.

Texas Department of Public Safety Director Steven McCraw said later that nearly 20 officers waited around 45 minutes to breach the classroom door that was eventually unlocked to confront the shooter.

The Robb Elementary School sign is seen covered in flowers and gifts on June 17, 2022 in Uvalde, Texas, the location of a May mass shooting that killed 19 students and two teachers. (Photo by Brandon Bell/Getty Images)

In a 77-page report released by the Texas House of Representatives Investigative Committee on the Robb Elementary School Shooting, investigators determined 376 law enforcement officers were at the school at the time of the shooting. The law enforcement officers, including nearly 150 U.S. Border Patrol agents and 91 state police officials, waited outside the school for over an hour as the shooter continued firing his weapon, the report found.

The Uvalde shooting that left 19 children and two adults dead took place on May 24 and a Border Patrol tactical team killed 18-year-old gunman Salvador Ramos at the scene.