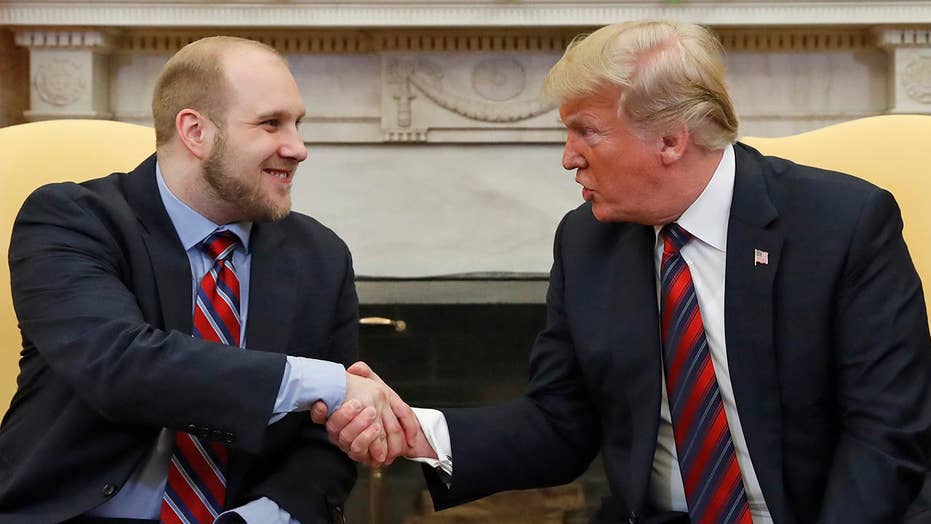 Joshua Holt, who was “unjustly detained” in Venezuela for two years, arrived to a warm welcome in his home state of Utah Monday night after meeting with President Donald Trump in Washington D.C.

Holt and his wife Thamy were greeted at Salt Lake City International Airport by a crowd filled with family, friends, and politicians who joined the couple and their daughter in the singing of the national anthem.

A second homecoming celebration will take place in Holt’s hometown of Riverton City, Utah, where streets were lined with green ribbons on light poles and trees. Green is Holt’s favorite color, the Salt Lake Tribune reported.

The 26-year-old’s long-awaited arrival comes after he spent roughly two years incarcerated in Venezuela after traveling to the country in the summer of 2016 to marry Thamara Candelo. The pair planned to return to the U.S. after their nuptials, but were jailed in El Hilcolde on what human rights groups said were largely trumped-up charges.

Holt met with Trump at the White House Saturday following his return back to the U.S.

Trump said it was "a great honor" to have the Holts there after "a very tough ordeal in a Venezuelan prison."

While at the White House, Holt said he was "overwhelmed with gratitude" to those who worked for his freedom. He also thanked his wife for supporting him through the "very difficult two years."