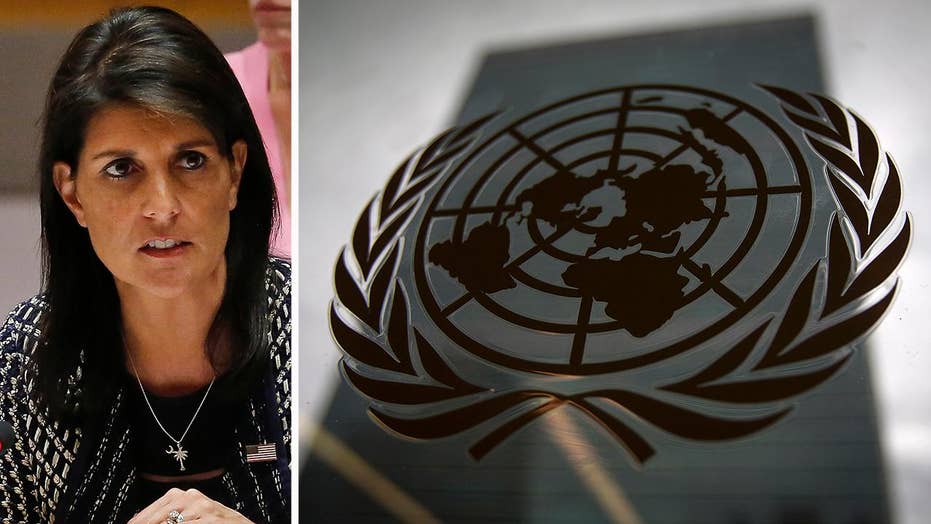 UN to vote on draft resolution against Jerusalem recognition

UNITED NATIONS – It was the first United States veto at the United Nations Security Council under the Trump administration, and the first American one in six years.

U.S. Ambassador to the U.N., Nikki Haley, was the lone raised hand voting no on the Egyptian-sponsored resolution that demands President Trump rescind his declaration that Jerusalem is the capital of Israel.

While the resolution did not mention President Trump, or the U.S. by name, it expressed "deep regret at recent decisions concerning the status of Jerusalem," and asked other nations not to move their embassies to the Holy City.

Haley said the administration is not pre-judging Jerusalem's final status or the peace process. But she told her fellow diplomats that no country can tell the U.S. where to put its embassy.

"What we witnessed here today in the Security Council is an insult. It won't be forgotten. It is one more example of the United Nations doing more harm than good in addressing the Israeli-Palestinian conflict. Today, for the simple act of where to put our embassy, the United States was forced to defend its sovereignty. The record will reflect that we did so proudly," Haley stated.

U.S. Ambassador to the U.N., Nikki Haley, was the lone raised hand voting no on the Egyptian-sponsored resolution that demands President Trump rescind his declaration that Jerusalem is the capital of Israel. (REUTERS)

"Today, for acknowledging a basic truth about the capital city of Israel, we are accused of harming peace. The record will reflect that we reject that outrageous claim. For these reasons, and with the best interests of both the Israel and the Palestinian people firmly in mind, the United States votes no."

Haley also bluntly said that "The United States will not be told by any country where we can put our embassy."

Haley also called the accusations that the U.S. is harming the peace process, "a scandalous charge." She said that no country has done more to assist the Palestinian people.

"What does it gain the Palestinian people for their leaders to throw up roadblocks to negotiations? A peace process that is damaged by the simple recognition that Jerusalem is the capital of Israel is not a peace process, it is a justification for an endless stalemate."

But the Permanent Observer of Palestine to the U.N., Riyad Mansour, was having none of it. He slammed the Trump administration, charging that it is "100 percent biased" for Israel, and that the policy would "further obstruct peace."

"The draft resolution reiterates that any position changing character of Jerusalem has no legal effect, and is null and void," he said. "One state decided to stand against the whole world."

"It is reprehensible that the U.S. has chosen to disregard international law and abandon decades of its own policy, choosing to side with the occupation, at the expense of the legitimate rights of the Palestinian people and against the prevailing wisdom and consensus on the Palestine question," he said.

Mansour also said that the Trump policy breaks with decades of U.S. foreign policy, and that it "lacks reality."

But the U.S. veto was praised by Danny Danon, Israeli Ambassador to the U.N. He also condemned the world body.

"Today, the United Nations has taken another step backwards," he said. "Those who voted for today's resolution have only reaffirmed the U.N's decades-long double standard when it comes to Israel. They are guilty of blatant hypocrisy."

While the resolution did not mention President Trump, or the U.S. by name, it expressed "deep regret at recent decisions concerning the status of Jerusalem," and asked other nations not to move their embassies to the Holy City. (REUTERS)

"We thank the United States for staying loyal to the truth and vetoing this absurd resolution," Danon said.

The Jerusalem issue will now go to the U.N. General Assembly, which is expected to hold a vote in the coming weeks. A similar measure was recently approved overwhelmingly, by a vote of 151 to 6. The nations that opposed the resolution were the United States, Israel, Canada, Nauru, Micronesia, Marshal Islands and the Solomon Islands.

Tamara Gitt and Ben Evansky contributed to this report.