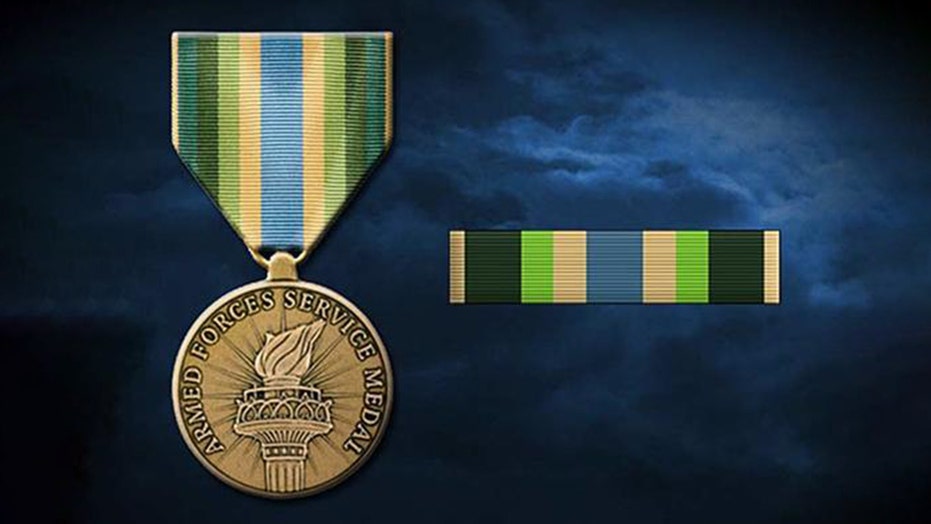 The Pentagon authorized the award for troops who have assisted Customs and Border Protection since April 7, 2018, a Marine Corps administrative message said last week.

Eligible troops must have operated on U.S. territory within 115 miles of the Mexico border in Texas, New Mexico, Arizona or California. Troops in San Antonio, Texas, and those serving in U.S. waters within 24 nautical miles of the coast are also eligible.

The Armed Forces Service Medal is awarded to troops involved in "significant" military activity and "encounter no foreign armed opposition or imminent threat of hostile action," according to the Defense Department. (U.S. Air Force graphic by Staff Sgt. Alexx Pons)

The Armed Forces Service Medal is awarded to troops serving in units that have undertaken "significant activity" in a military operation and "encounter no foreign armed opposition or imminent threat of hostile action," according to the Defense Department.

It was established by former President Bill Clinton under an executive order in 1996 and was previously given to troops deployed to the border under former President George W. Bush, according to Military.com. The award also has been given to service members fulfilling humanitarian missions overseas.

An end date for service that would merit receiving the award has yet to be determined since the operation is ongoing.

Thousands of service members have deployed to the U.S.-Mexico border since President Trump declared the porous border a crisis last year. Last month, the Pentagon approved the deployment of 2,100 troops to the border. The new troops would join 4,500 others.

Service members have reportedly assisted with logistical support and aerial surveillance at ports of entry, and have provided Customs and Border Protection staff with support at temporary migrant holding facilities.

Meanwhile, Democratic lawmakers have ratcheted up criticisms of conditions at the border, assailing the treatment of migrants and refusing to provide additional funding for a border wall.