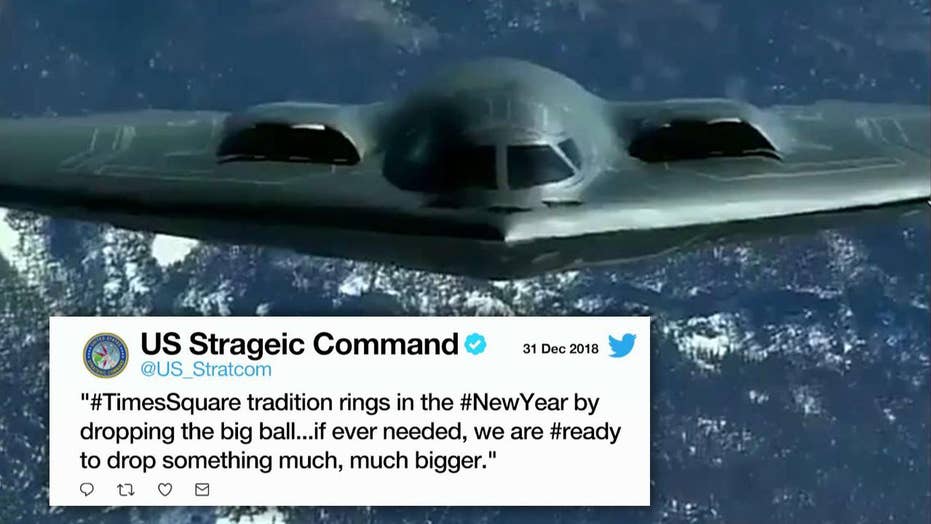 In a subsequently deleted post, the United States Strategic Command said it stands ready 'to drop something much, much bigger' than the famous New Year's Eve bedazzled ball.

The arm of the U.S. military responsible for the country's nuclear strike capabilities drew widespread condemnation on New Year's Eve when it tweeted a strange message about dropping a bomb.

In the tweet, which was posted as revelers around the country were preparing to ring in 2019 and was deleted three hours later, the United States Strategic Command said the nation was "ready to drop something much, much bigger" than the famous New Year's Eve bedazzled ball.

A video shared as part of the tweet reportedly included footage of a B-2 stealth bomber soaring across the sky before releasing two GPS-guided bombs that exploded into a ball of fire before hitting the ground. In the background, pulsing music could be heard and the words "STEALTH," "READY" and "LETHAL" flashed across the screen in block letters, reports The New York Times.

A spokesperson for the Strategic Command told the Times the post “was part of our Year in Review series meant to feature our command priorities: strategic deterrence, decisive response and combat-ready force.”

“It was a repost from earlier in the year, dropping a pair of conventional Massive Ordnance Penetrators at a test range in the United States,” the spokesperson added, without elaborating further.

Stratcom is one of ten unified commands in the Department of Defense that provides a range of capabilities including strategic warning, missile defense, global command and communications, and intelligence and reconnaissance.

The bizarre tweet prompted a backlash from some users on social media.

This isn't the first time a government Twitter feed has had to apologize and delete a tweet. In May of last year, the Air Force apologized and deleted a tweet that tried to link fighting against the Taliban to a viral debate on the Internet.