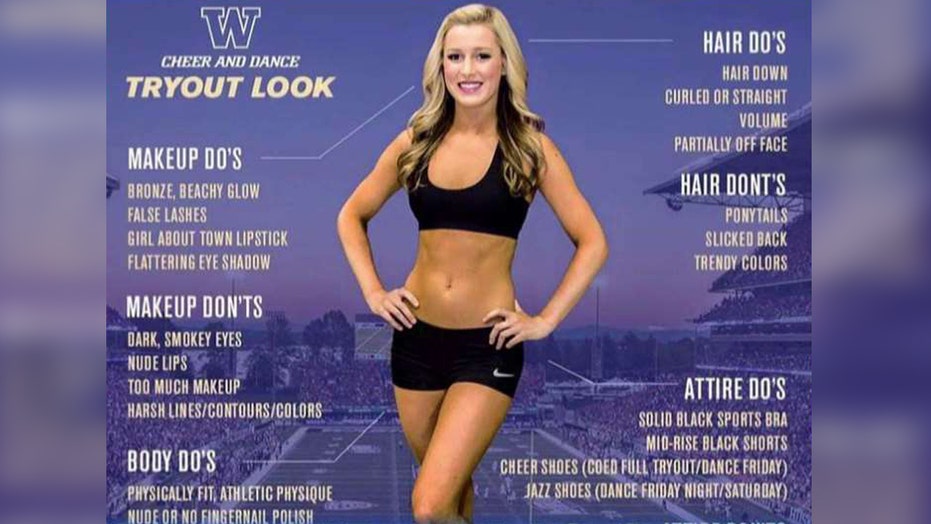 The University of Washington removed an infographic Tuesday that gave prospective cheerleaders tips on how to do their hair and makeup for tryouts after strong social media backlash.

The graphic advised women to wear their hair “straight or curled” along with “false eyelashes” and “flattering eye shadow.” It discouraged women from wearing “distracting fingernail polish” or “tops that cover the midriff.”

The Seattle Times reported the advice along with a photo of a white woman in blond hair posing in a black sports bra was posted on the cheerleading team’s Facebook page. The post was removed before 9 a.m. Tuesday.

“I can't believe this is real,” Jazmine Perez, a University of Washington student and director of programming for student government, told the Seattle Times. “One of the first things that comes mind is objectification and idealization of Western beauty, which are values I would like to believe the University doesn’t want to perpetuate. As a student of color who looks nothing like the student in the poster, this feels very exclusive.”

A Seattle resident also called the infographic racist. He said the picture is “offensive, exclusionary, and ignorant. Those are not value of Seattle of the Puget Sound community.”

The University of Washington athletics department said they created the graphic in response to the amount of questions that were asked about cheerleading and dance team tryouts.

According to The Times, the department removed it after it was “determined that some of the details and descriptions provided were inconsistent with the values of the UW spirit program and department of athletics.”