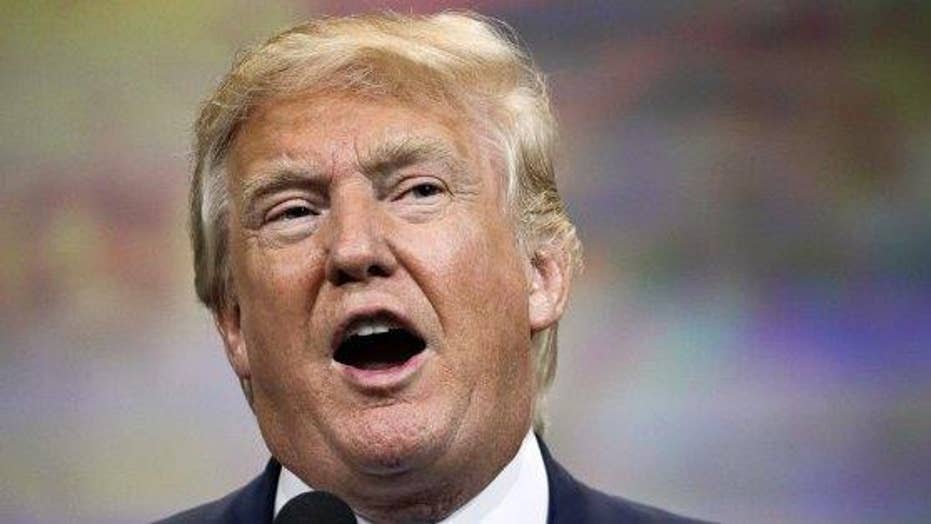 Does Ohio State attack prove Trump was right on immigration?

President-elect doubles down on his immigration stance

ALBUQUERQUE, N.M. – Universities and colleges in several states are considering labeling themselves "sanctuary campuses" amid fears from immigrant students and pressure from activists following the election of Donald Trump.

College administrators in New Mexico — the state with the highest percentage of Latino residents— are looking into proposals that would grant immigrant students living in the country illegally protections while they pursue their studies.

Meanwhile, advocates in California, Georgia, Illinois, Minnesota and Texas are pressing their state and private universities to provide sanctuary to these immigrant students, known as DREAMers.

"We urge you to declare the University of San Diego a sanctuary campus for students, faculty, staff and community members now facing, among other things: the threat of deportation under President-elect Donald J. Trump's policy proposals, and the specter of hate speech and bigoted violence in our campus community," read a letter from alumni to administrators of the private Roman Catholic university.

Universities and colleges in several states are considering labeling themselves "sanctuary campuses" amid fears from immigrant students and pressure from activists following the election of Donald Trump. (AP)

Trump's alma mater — the University of Pennsylvania — even has renewed its pledge to block federal agents without a warrant from removing students in the country illegally.

"Let us be unequivocally clear: We are and remain resolute in our commitment to Penn's undocumented students and will do all that we can to ensure their continued safety and success here at Penn," University of Pennsylvania President Amy Gutmann and other administrators wrote in a letter released Wednesday.

Students and professors at University of Illinois campuses are circulating petitions to make their schools sanctuary campuses. One such group in Chicago gathered more than 1,700 signatures and turned them over to school leaders.

The movement comes after Trump promised to end an executive order that granted temporary status to immigrant students living in the country illegally. During his campaign, he also promised to launch a "deportation force" and withhold federal funding from sanctuary cities.

Trump has not said anything about sanctuary campuses.

The specifics of advocates' sanctuary demands vary. Some are asking colleges not to cooperate with federal authorities on immigrant issues, while others want administrators to block federal immigration authorities from searching campuses.

University of New Mexico President Bob Frank said university lawyers were looking into sanctuary status after a group of professors came to his office last month to deliver a letter with more than 900 signatures. The Santa Fe Community College board of regents declared itself a "sanctuary campus" this week.

University of Illinois leaders have tackled the issue at the flagship Urbana-Champaign location, about 150 miles from Chicago, saying a working group will review the legal ramifications of making the roughly 44,000-student campus a sanctuary.

The University of Illinois at Chicago petition, which cites the presidential election, asks university leadership to "ensure the safety and protection of undocumented , Muslim and all students, staff and their families who may be targeted or put under surveillance by formally declaring UIC as a sanctuary campus."

While on the campaign trail in March, Trump abruptly canceled a scheduled campaign rally at the University of Illinois at Chicago amid spirited student protests.

Not all schools are considering sanctuary campus status despite letters, petitions or even protests.

New Mexico State University President Garrey Carruthers said Friday in a memo to employees and students that NMSU doesn't discriminate on the basis of immigration status or require proof of citizenship for admission. However, NMSU respects "the diversity of opinion" and won't declare itself a sanctuary or ban federal agents from campus because that would jeopardize federal funding, he said.

The California State University system announced recently it won't use the "sanctuary" term at any of its 23 campuses, but it won't cooperate with any new federal policy that targets immigrant students living in the country illegally.

This week, the University of California announced steps to protect students in the country illegally, saying it won't assist federal immigration agents or turn over confidential records without court orders. It also said it won't provide information for any national registry based on race, religion or national origin.

If Trump ends the program launched by President Barack Obama called Deferred Action for Childhood Arrivals, or DACA, the status of immigrant students will vary by state. Some states do not allow students living in the country illegal to attend college at in-state tuition rates.

However, state colleges in New Mexico allow immigrants suspected of living in the country illegally to attend at the in-state tuition rate. The state also lets the same students access financial aid if they graduate from a New Mexico school and maintain a high grade-point average.

Community colleges in Chicago, which offer free tuition to qualifying students regardless of immigration status, beefed up anti-discrimination policies this week to include immigration status. In 2011, Illinois established a privately backed scholarship fund for students living in the country illegally. Pending legislation at Illinois' Capitol would let immigrant students get financial aid regardless of their legal status.