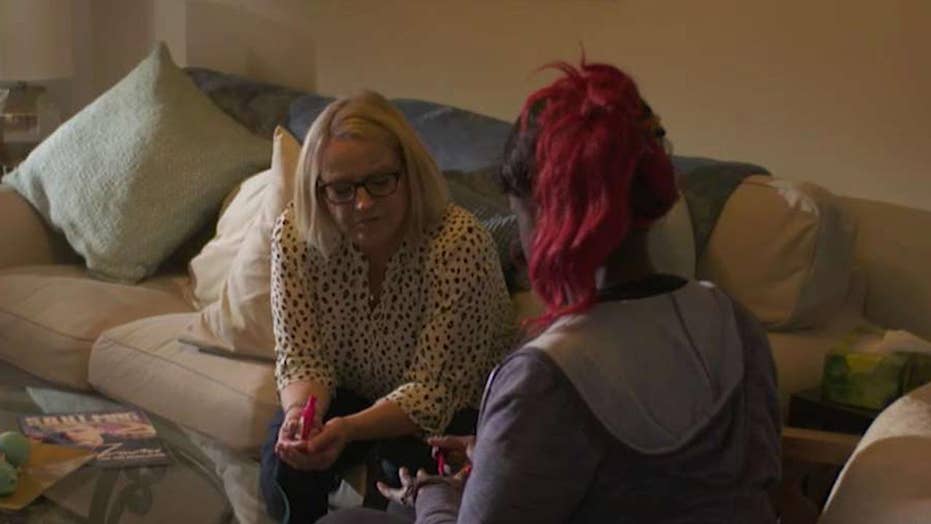 Survivors of human trafficking talk about how people get trapped in this abusive trade.

Her story began like so many others, with an exploitation of trust.

Edie Rhea is a survivor of sex trafficking. Her formative years were largely spent being sold for sex by her mother’s boyfriend. It began when she was 10 and lasted until she was 17 years old.

"A lot of people would purchase me out of the meat store. Sometimes I would have to have sex with them in the meat store, where the frozen meat was at.”

“He really did take on that daddy-figure role,” Rhea said. “Then at 10 started sexually abusing me and trafficking me. That literally wrecked my world, my whole life.”

Rhea’s story is unique to her, and no two trafficking stories are identical – but there are common threads that exist among most survivors. Often, traffickers prey on the vulnerabilities of young teenagers who face troubles at home.

“Most of the victims are folks that are in such a vulnerable position they are not able to make their own decisions,” William Sweeney, the assistant director in charge of the FBI’s New York bureau, said. “It’s often targeting the most vulnerable in society.”

Edie Rhea counsels a woman at the all-girls home she runs for sex trafficking survivors in Florida.

Rhea’s father died when she was 4 years old, leaving her mother with three young girls to care for. Her mother’s boyfriend became a father figure to Rhea – and used that trust to exploit her. She said he would sell her for sex out of the meat-packaging store her family owned.

“He would take me to somebody’s home. They could come to where I lived,” Rhea said. “We had a meat store, so a lot of people would purchase me out of the meat store. Sometimes I would have to have sex with them in the meat store, where the frozen meat was.”

Rhea has rebounded from her tumultuous youth. Now, she works at an all-girls safe home for survivors of trafficking in Florida. Fox News agreed not to publicize the location or name of the home to protect the safety of the women who call it home.

“This is a safe, therapeutic home for women over the age of 18 that has experienced some type of sexual exploitation or human trafficking,” Rhea said.

Rhea’s path from abuse to survival to advocacy is a well-traveled one; many sex-trafficking victims feel a responsibility to help people who have known similar situations to theirs.

Brook Bello, another Florida-based trafficking advocate, founded More Too Life, a mentoring and counseling nonprofit that focuses on helping trafficking survivors right their lives. Like Rhea, she turned to advocacy after being sexually exploited by someone close to her family.

Brook Bello, founder of More Too Life in Florida, speaks with another woman.

“Every victim I’ve worked with has had an extraordinary negative relationship with a male, their father, or he’s been the rapist and the violator,” Bello said. “We work with victims that are 3 years old and up. The average victim that we work with, that’s over 18, started being raped at three.”

Her organization tries to provide survivors with self-worth and real-world skills. Bello said her goal is to turn a “victim to survivor, survivor to thriver, and thriver to champion.” Bello’s advocacy is borne from experience, and she uses that to connect and empower the women she works with.

Child abuse, homelessness and sexual assault are among the top risk factors reported by survivors.

— Data from the Polaris Project

Bello, like Rhea, experienced sexual abuse before being forced into sex trafficking. Their stories of rape and assault are not unique among survivors. Qualitative data compiled by the Polaris Project, a sex-trafficking advocacy group, found that child abuse, homelessness and sexual abuse are among the top risk factors reported by survivors.

“I was violently raped,” Bello said. “[I was a] baseball player, a straight-A student, science buff. Not the kind of kid who you would think would get caught up into what we now call human trafficking.”

Vulnerabilities provide traffickers with a way to either gain their victim’s trust or break down their defenses. The motivation for their exploitation is simple: money.

“It’s sex trafficking by force or coercion for money, for profit. Victimizing those young individuals for their purposes,” Sweeney said. "Money to the benefit of the pimp or the individual that is victimizing the children.”