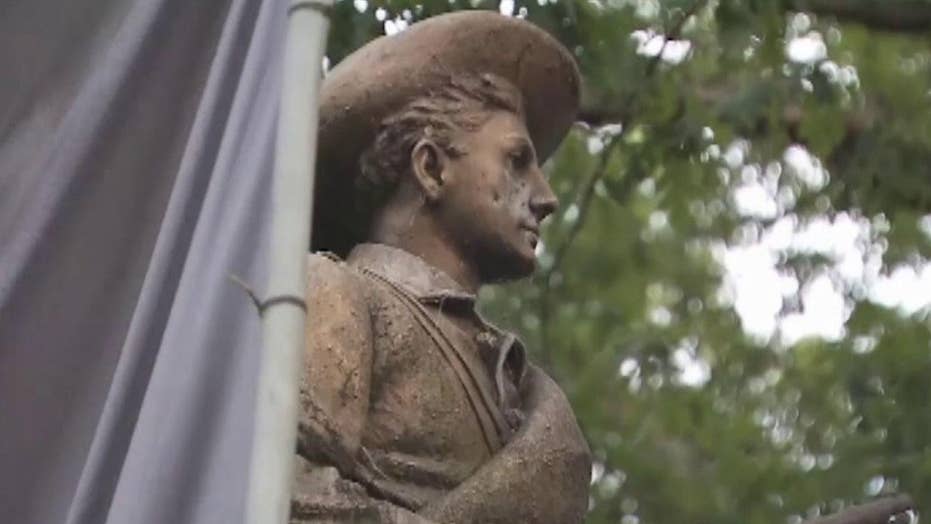 Demonstrators who claim to have been “brutally arrested” during a protest over a Confederate monument at the University of North Carolina said Sunday that police officers are the ones who “broke the peace."

The accusations by the Defend UNC group on Sunday came as the school identified the eight people who were taken into custody a day earlier near the former site of the memorial known as "Silent Sam." The statue was toppled Aug. 20 by protesters who called it a symbol of racist heritage, and multiple face-offs between supporters and opponents have occurred on campus since then.

“When the eight arrests took place, there were no neo-Confederates on campus; they had left at least ten minutes earlier,” the group said in a statement obtained by The News & Observer, a newspaper based in Raleigh. “Whatever safety risk the police believed themselves to be mitigating had passed. The police themselves were the only threat on McCorkle Place. They were undeniably the ones who broke the peace.”

The statement, according to the newspaper, was signed by Jody Anderson, Jason Athavale, Jayna Fishman, Joseph Baldoni Karlik, Josh Mascharka, Julia Pulawski, Brandon Webb and Christopher Wells, who identified themselves as the “the eight anti-racist activists brutally arrested.” UNC released their names and birthdates Sunday night. The group's ages ranged from 18 to 30. The eight are facing a variety of charges, including assault on a government official, weapons on educational property and resisting a public officer.

Wells also told the newspaper that two of those arrested attend UNC, two are students from nearby N.C. State University and another goes to Durham Technical Community College.

Karlik, The News & Observer added, was one of eight people who was charged in August 2017 with the toppling of a Confederate monument in Durham – but a judge dismissed the charges against him earlier this year.

About 100 anti-Silent Sam protesters had gathered Saturday on UNC’s Chapel Hill campus for a "Nazis Suck Potluck and Food Drive.” Nearby, about a dozen people holding Confederate flags held a vigil in a sectioned-off area near where the statue had stood.

After both groups began yelling at each other, the Silent Sam supporters were escorted away and someone threw what appeared to be a smoke bomb at them.

In a statement, the university said officers ordered the crowd to disperse "due to disorderly conduct." The officers also used smoke to "maintain safety and order," officials said.

Afterward, some counter-protesters began yelling at police, and some officers used the handlebars of their bicycles to push the Silent Sam protesters back.

In a campus-wide statement Aug. 31, University Chancellor Carol Folt strongly indicated the school won't return Silent Sam to the main quad where it used to stand, but she has stopped short of confirming its former spot has been ruled out.