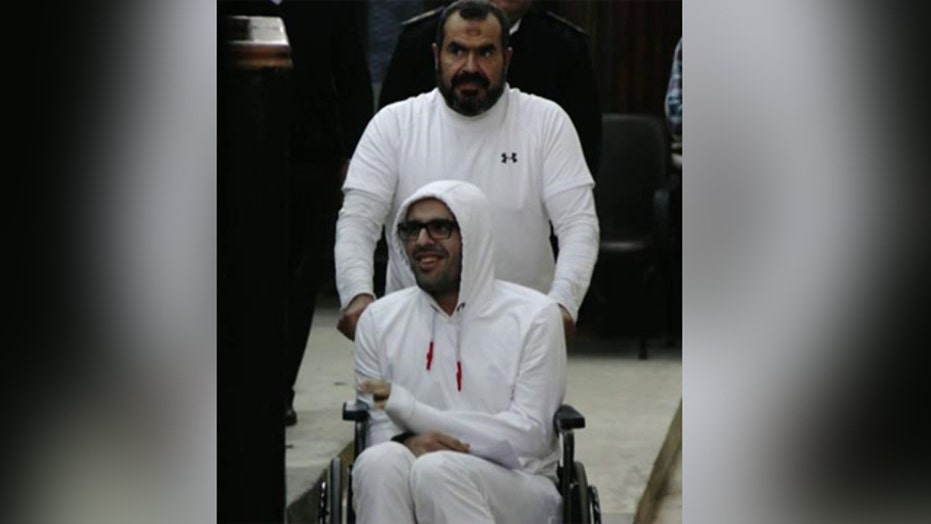 Mohamed Soltan returning to America after two years in prison

WASHINGTON – An Egyptian-American who had been sentenced to life in prison in Egypt and had been on a hunger strike for more than a year before being freed has arrived back in the United States.

Mohammed Soltan, the son of a prominent member of the now-outlawed Muslim Brotherhood, arrived at Dulles International Airport on Saturday night in a wheelchair, The Washington Post said. The newspaper said Soltan was greeted with tears, hugs and calls of "welcome home."

Soltan had been convicted of financing an anti-government sit-in and spreading "false news," one of thousands imprisoned after the 2013 military overthrow of Islamist President Mohammed Morsi.

The 27-year-old Ohio State University graduate and former Barack Obama campaigner had been on a hunger strike over his detention of more than a year, and his family said his health was deteriorating.

Soltan's release comes amid international criticism over Egypt's mass trials and imprisonments, and only days before President Abdel-Fattah el-Sissi travels to Germany on a state visit.

He was arrested in August 2013 when security forces came looking for his father at his home. His family said they didn't find the father at the time, but arrested him instead. His father, Salah, was detained later.

Waleed Nasser, a lawyer representing Soltan, said he was forced to renounce his Egyptian citizenship in order to secure his release. A decree el-Sissi issued in November allows him to deport foreign defendants convicted or accused of crimes.

In a statement, Soltan's family thanked those who helped work for his release, saying that the U.S. government had made extensive efforts to secure his return home.

"Mohammed's health is dire," his family said. "He will receive medical treatment as soon as he arrives on U.S. soil and will spend the immediate future with his family recovering."

A criminal court in April sentenced Soltan to life, while upholding death sentences for 14 people, including his father and Brotherhood leader Mohammed Badie, and sentencing 36 others to life in prison, including three Egyptian journalists.

The case is rooted in the violence that swept Egypt after the military-led ouster in July 2013 of Morsi, a veteran Brotherhood leader and the country's first freely elected president. His supporters set up protest camps in Cairo, but security forces violently dispersed the sit-ins in August 2013, killing hundreds. In retaliation, many police stations and churches came under attack.

Soltan had been working as an assistant and translator for U.S. and international news organizations during the protests, but prosecutors accused him of participating in a plan to overthrow the country's military rulers.