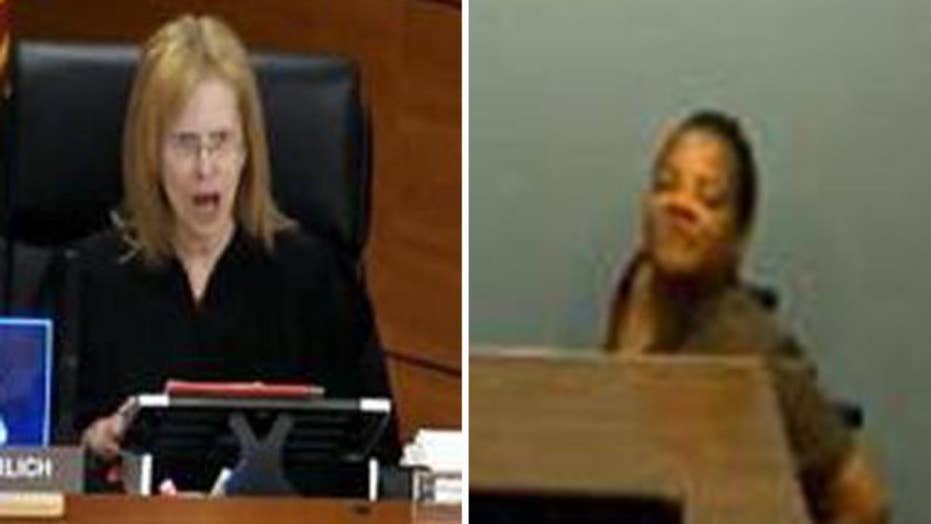 Judge Merrilee Ehrlich under fire video surfaces of an angry exchange with an inmate in a wheelchair.

A Florida judge was relieved of her duties Friday after berating a woman in a wheelchair who was having trouble breathing due to two medical conditions and who died at home three days after the encounter.

The judge’s berating of Twiggs was so extreme that the wheelchair-bound woman’s public defender, Howard Finkelstein, called for the judge to be banned from presiding over criminal proceedings.

“It is not appropriate for anyone to endure that kind of treatment,” Finkelstein's chief assistant, Gordon Weekes, told the Miami Herald.

During the video, which was posted on YouTube and as a comment on a judicial gossip site, Twiggs asks about receiving treatments and the judge can be heard shouting her down, saying, “I’m not here to talk about your breathing treatments.”

Twiggs appeared before Ehrlich in a video feed from the North Broward Bureau during the hearing in bond court.

At another point in the hearing, the judge shouted, “You’ve already said too much!”

Broward Chief Administrative Judge Jack Tuter said Saturday that he’s telling Ehrlich not to return to the courthouse because of her treatment of Twiggs, reports the Sun-Sentinel.

“In light of recent events, we have decided Judge Ehrlich will be told not to return to the courthouse as her retirement is effective June 30,” Tuter said. “I will be working this weekend to find a substitute to cover Judge Ehrlich's [family court] division.”

Twiggs, who suffered from asthma and chronic obstructive pulmonary disease, had been released on bail and died Wednesday in her sleep.

“We never knew anything about this video until yesterday,” Carolyn Porter, Twiggs’ goddaughter, told the Florida publication. “She tried to tell us how they treated her, but she had anxiety, and every time she tried to talk about it, she couldn’t breathe.”

“What I saw there was somebody that is not mentally and emotionally fit to sit in judgment of human beings. Nobody should suffer attacks like that.”

In an April 20 letter to Tuter, the public defender said that Ehrlich was “bullying” other defendants that day.

“She raised her voice to many defendants, berated the attorneys and was impatient and exasperated during the proceedings,” Finkelstein wrote.

He went on to write that Ehrlich’s demeanor was “embarrassing” and lacked “civility,” describing her as “aggressive and tyrannical.”

Her sister, Anna Lee Twiggs, told CBS Miami that Sandra Faye said “Anna, they treated me like a dog in the courthouse. They didn’t let me talk. The judge was so cruel.”

“When she came home from being in there she was never the same,” Carolyn Porter, Twiggs’ goddaughter, told CBS Miami.

“I was outraged,” Finkelstein told the Sun-Sentinel. “What I saw there was somebody that is not mentally and emotionally fit to sit in judgment of human beings. ... Nobody should suffer attacks like that because a judge is having a bad day.”

Attorney Bill Gelin, who runs the JAABlog site, told the paper that he contacted Twiggs’ family on Friday to confirm that she had died.

“No one had spoken to them or apologized on behalf of the legal system for the despicable way Twiggs was treated until I called,” said Gelin. “This was sickening to me, so I did it for them.”