FILE - In this Nov. 30, 2017 file photo, American soldiers wait on the tarmac in Logar province, Afghanistan. Two members were killed Friday during an operation in the country. (Associated Press)

Two U.S. service members were killed during an operation in Afghanistan on Friday, according to U.S. and NATO forces.

The statement didn't specify the location of combat, what the service members were doing or who they were fighting. Their names were being withheld pending notification of their next of kin, according to Department of Defense policy. The fatalities bring the number of U.S. service members killed this year in Afghanistan to four.

Friday's deaths were the first for U.S. forces there since January. Last year, 13 American troops died while deployed there.

TALIBAN LEADER MULLAH OMAR LIVED 'DANGEROUS' LAST YEARS OF HIS LIFE IN THE SHADOWS OF US BASES, BOOK CLAIMS

The U.S. has held several rounds of talks with Taliban militants in an effort to reach a peace agreement to end the 17-year conflict. Both sides are in agreement about the withdrawal of U.S. forces but remain divided over a timeline and whether some American troops would remain.

The Taliban has refused to speak with the Afghan government, which it describes as a puppet of the U.S.

Earlier this month, Afghanistan’s top security official warned that reaching an agreement with the insurgency without the government could amount to dishonoring the 9/11 victims and U.S. troops who lost their lives.

“It would be a shame if a deal was made with the terrorists who killed more than 5,400 Americans, and if they were given control of the lives of the Afghan people. That would be a win for those terrorists,” Hamdullah Mohib, the national security adviser of Afghanistan, who previously served as the ambassador to the United States, told Fox News at the U.N. Mission in New York. “It would also dishonor the one million Americans who have served in Afghanistan.” 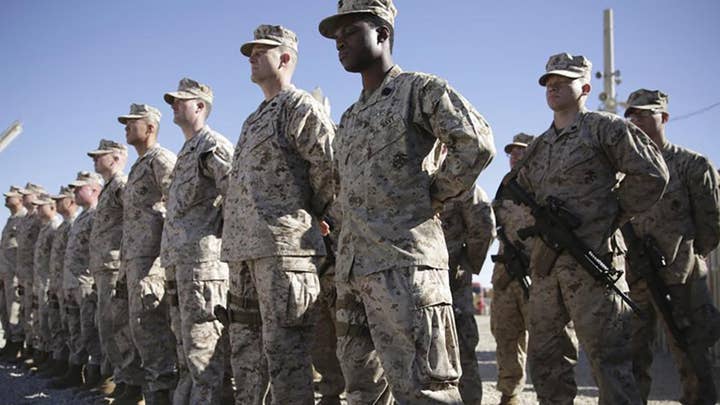 President Trump and his national security team held a classified meeting on Afghanistan at the White House last Friday, a day after Mohib complained that the Trump administration was keeping his government in the dark about its negotiations with the Taliban, the Associated Press reported.

The U.S. has 14,000 troops deployed to Afghanistan. American forces have been supporting Afghan troops fighting the Taliban and the Islamic State, which has expanded its footprint in the country.

The Pentagon has been developing plans to withdraw as many as half of U.S. troops still in Afghanistan. Patrick Shanahan, acting secretary of defense, said last week that he had no orders to reduce the U.S. troop presence, although officials say that is at the top of the Taliban's list of demands in exploratory peace negotiations.

Shanahan made a surprise visit to the country last month where he commented possible troop withdrawals.

“I think the presence we want in Afghanistan is what assures our homeland defense and supports regional stability, and that any type of sizing is done in a coordinated and disciplined manner,” he said ahead of his arrival.

Afghan President Ashraf Ghani said recently that 45,000 Afghan troops had been killed in the past four years, the BBC reported.

Fox News' Lucas Tomlinson and Hollie McKay and the Associated Press contributed to this report.