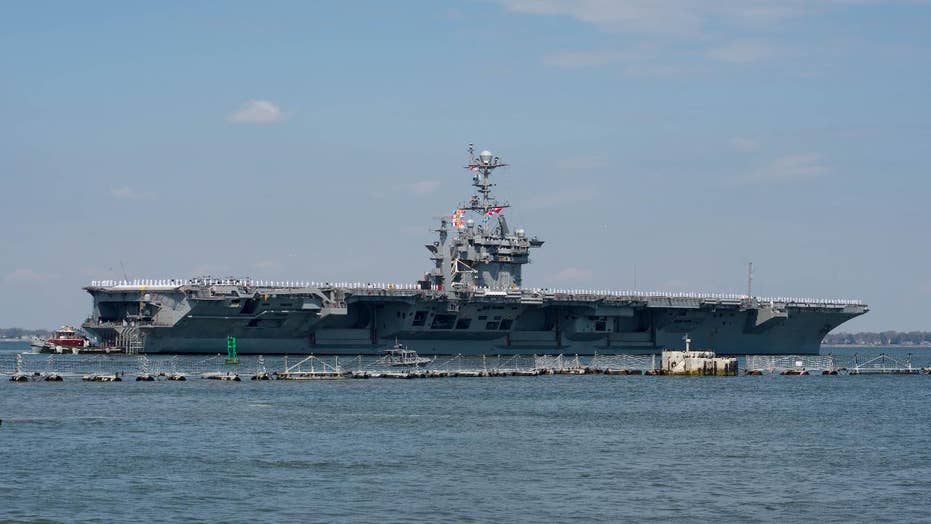 The commander-in-chief meets with his top military advisers over how to respond to suspected chemical weapons attack in Syria; national security correspondent Jeniffer Griffin reports from the Pentagon.

WASHINGTON – The United States, France and Britain launched military strikes in Syria to punish President Bashar Assad for an apparent chemical attack against civilians and to deter him from doing it again, President Donald Trump announced Friday. Explosions lit up the skies over Damascus, the Syrian capital, as Trump spoke from the White House.

Syrian television reported that Syria's air defenses, which are substantial, responded to the attack. After the attack ceased and the early morning skies went dark once more, vehicles with loudspeakers roamed the streets of Damascus blaring nationalist songs.

Trump said the U.S. is prepared to sustain pressure on Assad until he ends what the president called a criminal pattern of killing his own people with internationally banned chemical weapons. It was not immediately clear whether Trump meant the allied military operation would extend beyond an initial nighttime round of missile strikes.

"The evil and the despicable attack left mothers and fathers, infants and children, thrashing in pain and gasping for air.  These are not the actions of a man; they are crimes of a monster instead," Trump said.

British Prime Minister Theresa May said in London that the West had tried "every possible" diplomatic means to stop Assad from using chemical weapons. "But our efforts have been repeatedly thwarted" by Syria and Russia, she said.

"So there is no practicable alternative to the use of force to degrade and deter the use of chemical weapons by the Syrian regime," May said. "This is not about intervening in a civil war. It is not about regime change."

French President Emmanuel Macron said in a statement that a target of the strike was the Syrian government's "clandestine chemical arsenal."

Trump did not provide details on the joint U.S.-British-French attack, but it was expected to include barrages of cruise missiles launched from outside Syrian airspace. He described the main aim as establishing "a strong deterrent" against chemical weapons use. The Syrian government has repeatedly denied any use of banned weapons.

The decision to strike, after days of deliberations, marked Trump's second order to attack Syria. He authorized a barrage of Tomahawk cruise missiles to hit a single Syrian airfield in April 2017 in retaliation for Assad's use of sarin gas against civilians.

At the Pentagon, Secretary of Defense Jim Mattis said the strike was "harder" on the Syrian regime than the 2017 strike and targeted "Syrian chemical weapons infrastructure." He described it as a "a one-time shot," adding, "I believe it has sent a very strong message."

Mattis said there were "no reports of losses" on the part of U.S. and allied forces participating in the strike, which included manned aircraft. Mattis estimated the air campaign was about twice the size of the 2017 strike. He added that the U.S. expects the Syrian government and its allies to conduct a "significant disinformation campaign," which the Pentagon would rebut with additional information Saturday morning.

The air campaign could frustrate those in Trump's base who oppose military intervention and are wary of open-ended conflicts.

Trump chastised Syria's two main allies, Russia and Iran, for their roles in supporting "murderous dictators," and noted that Russian President Vladimir Putin had guaranteed a 2013 international agreement for Assad to get rid of all of his chemical weapons. He called on Moscow to change course and join the West in seeking a more responsible regime in Damascus.

"Russia must decide if it will continue down this dark path, or if it will join with civilized nations as a force for stability and peace," Trump said. "Hopefully, someday we'll get along with Russia, and maybe even Iran — but maybe not."

The U.S. missile strike a year ago, which targeted the airfield from which Syrian aircraft had launched their gas attack, was meant to deter Assad from further use of chemical weapons. Since that did not work, a more intense attack would aim to degrade his ability to carry out further such attacks, and would try to do this by hitting Syrian aircraft, military depots and chemical facilities, among other things.

The strikes that hit early Saturday in Syria came hours before inspectors from the Organization for the Prohibition of Chemical Weapons were set to arrive to inspect the site of the apparent attack.

A broader question is whether the allied attacks are part of a revamped, coherent political strategy to end the war on terms that do not leave Assad in power.

The strikes appear to signal Trump's willingness to draw the United States more deeply into the Syrian conflict. Just weeks ago, Trump said he wanted to end U.S. involvement in Syria and bring American troops home to focus on the homeland. The participation of British and French forces enables Trump to assert a wider international commitment against the use of chemical weapons, but the multi-pronged attack carries the risk of Russian retaliation.

Gen. Joseph Dunford, the chairman of the Joint Chiefs of Staff, said the U.S. did not coordinate targets with or notify the Russian government of the strikes, beyond normal airspace "de-confliction" communications.

In his nationwide address, Trump stressed that he has no interest in a longtime fight with Syria.

"As other nations step up their contributions, we look forward to the day when we can bring our warriors home," Trump said. "And great warriors they are."

The U.S. has about 2,000 troops on the ground in Syria as advisers to a makeshift group of anti-Islamic State fighters known as the Syrian Democratic Forces. They are in eastern Syria, far from Damascus. A U.S.-led coalition has been conducting airstrikes in Syria since September 2014 as part of a largely successful effort to break the IS grip on both Syria and Iraq.

Jarrod Agen, Vice President Mike Pence's deputy chief of staff, said Pence called congressional leaders from his hotel suite in Lima, Peru, to notify them of the president's plan to address the nation about the Syrian air strikes.