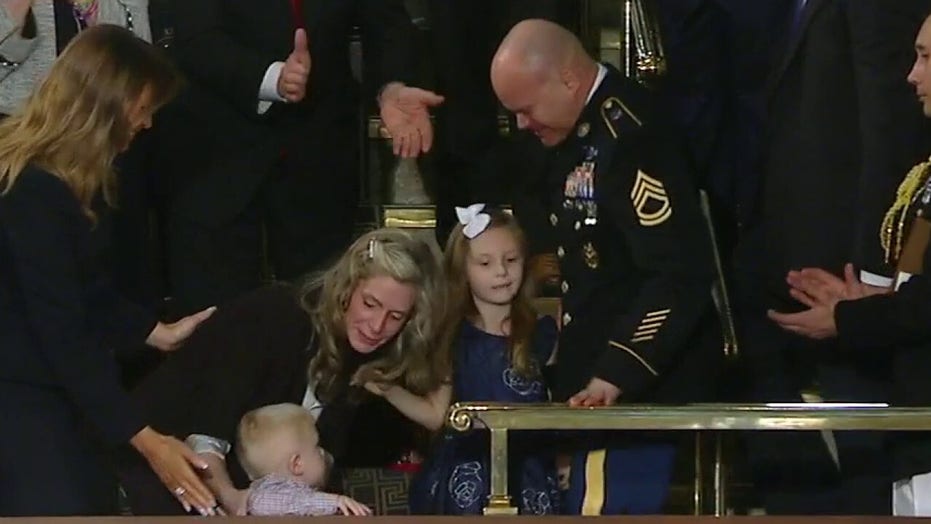 Soldier returns from Afghanistan, reunites with family at State of the Union

President Trump's State of the Union address on Tuesday night, his last prior to November’s presidential election, was full of surprises.

Mid-speech, the president awarded the Presidential Medal of Freedom to an emotional Rush Limbaugh, 69, who revealed an advanced lung cancer diagnosis to his listeners on Monday. First lady Melania Trump, seated next to the conservative radio host, presented the medal to Limbaugh, tying it around his neck.

But perhaps the biggest surprise of the evening came when Trump announced that Sgt. 1st Class Townsend Williams -- currently on his fourth deployment to the Middle East -- was actually in the House chamber, where his wife, Amy Williams of Fort Bragg, N.C., was in attendance as one of the president's guests, along with their two children.

Townsend Williams walked down the stairs in the gallery to thunderous applause in a military homecoming surprise that neither is likely to forget.

As Amy Williams watches, her husband Sgt. 1st Class Townsend Williams, greets first Lady Melania Trump after he surprised her by appearing at the State of the Union address by President Donald Trump in a joint session of Congress on Capitol Hill in Washington, Tuesday, Feb. 4, 2020. Their children Rowan, 3, and Elliana, watch. (AP Photo/J. Scott Applewhite)

“Amy works full-time, and volunteers countless hours helping other military families,” Trump continued. “For the past seven months, she has done it all while her husband, Sgt. 1st Class Townsend Williams, is in Afghanistan on his fourth deployment to the Middle East," the president said. "Amy's kids have not seen their father's face in many months. Amy, your family's sacrifice makes it possible for all of our families to live in safety and peace -- we thank you.”

Townsend Williams then moved quickly down the aisle to embrace his children and wife.

During his address, President Trump also pressed the joint session of Congress to pass a bill that would ban abortions in late pregnancy and drew attention to a 2-year-old girl who was born at 22 weeks gestation and was able to survive thanks to medical breakthroughs.

"Whether we are Republican, Democrat or independent, surely we must all agree that every human life is a sacred gift from God," Trump said.