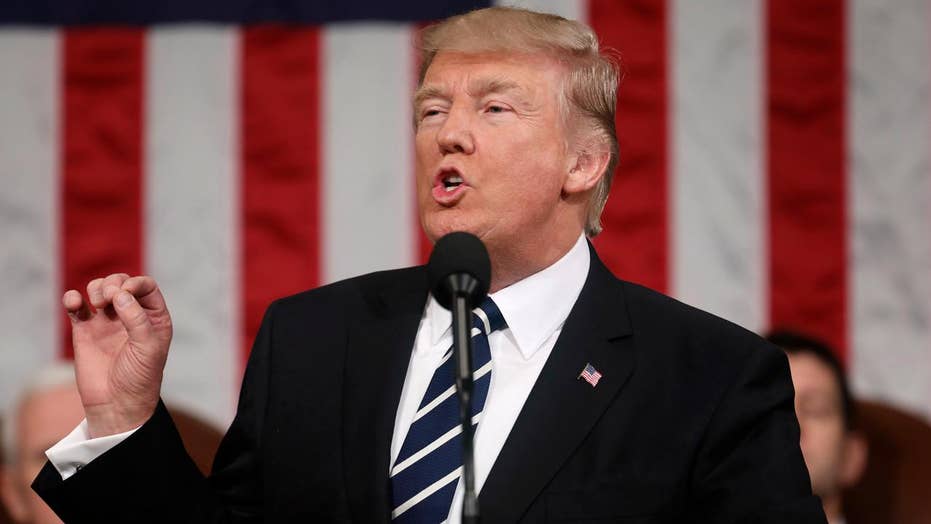 Trump makes inroads with unions with promise to create jobs

President Trump tweeted Wednesday morning that January and February were the “strongest consecutive months for hiring” since mid-2015, citing a LinkedIn Workforce Report.

The president was referring to the new monthly newsletter the business and employment-oriented social networking service began providing to members last month. This month’s Workforce Report is just the second ever.

That report underscores how the economy is strengthening under President Trump – and how companies are hiring in growing numbers.

On Wednesday, ADP also released its ADP National Employment Report, which showed that private payrolls grew by 298,000 jobs last month, more than expected by economists, who initially projected a gain of 190,000 jobs.

While the Bureau of Labor Statistics will not release its February numbers until the end of the week, the agency’s January report cited 227,000 “non-farm” payroll employment increases, with the majority of those job gains occurring in retail trade, construction and financial activities.

But economists warn that while gains are a positive, monthly job reports are often “noisy” and tend to be “over-used." They also said the presidents could have less influence on markets than people think.

“The administration should be careful because if you live by temporary numbers, you’ll die by temporary numbers,” Salim Furth, research fellow in macro-economics at the Heritage Foundation, told Fox News. “Trump and Republicans shouldn’t rest on their laurels before they get things done.”

President Trump promised throughout his campaign to “bring jobs back” to the United States. And just two months into his administration, companies seem to be getting on board.

Just this week, Exxon Mobil pledged to spend $20 billion by 2022 to expand its footprint along the U.S. Gulf Coast, which is expected to create more than 45,000 jobs.

“This is exactly the kind of investment, economic development and job creation that will help put Americans back to work,” Trump said in a statement released by the White House on Monday. “Many of the products that will be manufactured here in the United States by American workers will be exported to other countries, improving our balance of trade.”

Other companies that have pledged significant job creation since Trump won the election are Amazon, which is planning to create 100,000 new jobs, SoftBank Group, IBM, Walmart, Sprint, OneWeb, Bayer/Mosanto, Intel and a slew of other companies.

Furth attributed this extreme job growth to the “anticipation” of good policy.

“Policy matters, not personality, and Trump hasn’t been in office long enough to see real results in slow-moving markets like the job market,” Furth said. “There is an effect where a policy has an impact before it is enacted because of the anticipation -- but I’m looking for policies to have an impact, and go across the finish line -- not just a glitz of the first 100 days.”

But Furth said that while he feels the media tends to “overplay” the impact of politicians, the economy is “organic.”

“This is not just a Trump phenomenon, job numbers come out and this is a perennial,” Furth said. “It’s my job as an economist to say, well, let’s not read too much into it.”