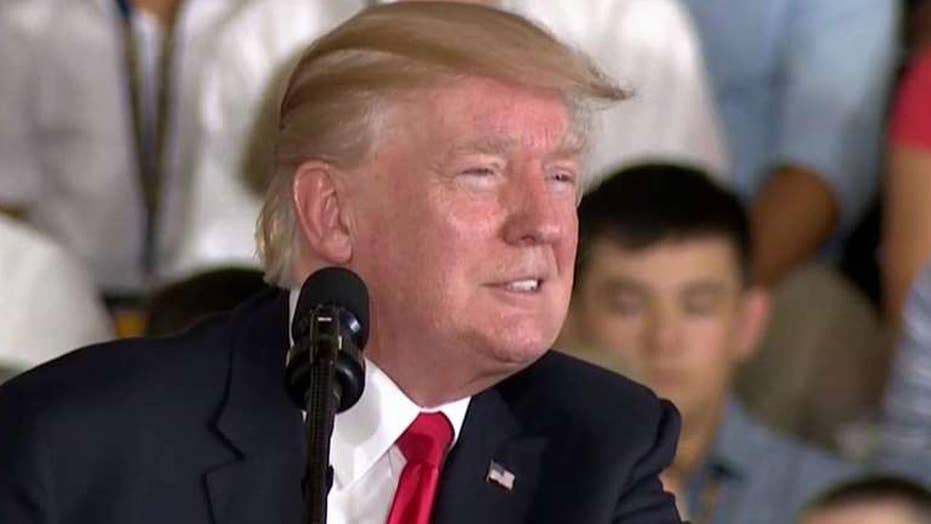 Trump: Call your senators about the budget, health care

President Trump presided Saturday in Virginia over the commissioning of the nation’s newest aircraft carrier, the USS Ford, saying, “American hands and American steel constructed a 100,000 ton message to the world. American might is second to none.”

Trump, in his 17-minute speech, avoided political controversies like the Russia meddling-conclusion ordeal that has engulfed his roughly 6-month-old presidency.

However, he used the event to call for an end to sequestration, a congressional agreement on mandatory, across-the-board spending cuts. And he promised Americans tens of billions more in federal spending for the military.

Trump also told those in attendance at the Norfolk, Va., naval yard to call their senators to urge them to pass an ObamaCare overhaul bill. Earlier in the morning, he tweeted nearly a dozen times about such familar sore-spots as Russia, Hillary Clinton and "fake news."

The warship, named after late-President Gerald Ford, joins the Navy fleet behind schedule and at inflated price tag of $12.9 billion. The Navy blames the delays and cost overruns on the ship's state-of-the-art systems.

Some of the overruns were blamed on the ship's electromagnetic launch systems for jets and drones that will replace steam catapults.

Trump visited the carrier in March to promote his plans for a military buildup.

He told Time magazine this year that the Navy should revert to using steam catapults to launch fighter jets because some of the state-of-the-art systems and technology aboard the USS Ford "costs hundreds of millions of dollars more money and it's no good."

However, on Saturday he praised the ship and its sailors.

“We are so very blessed with Americans who are willing to fight for this great nation,” he said.

The warship also has a smaller “island,” or tower in which commanders work, that sits farther back on the ship to make it easier and quicker to refuel, re-arm and relaunch planes. The vessel also has a nuclear power plant designed to allow cruising speeds of more than 30 knots and operation for 20 years without refueling.

The vessel completed sea trials in April but still will go through a battery of tests and workups at sea before becoming operational and ready for deployment, work that is expected to cost nearly $780 million and take more than four years to complete, congressional auditors said in a report this month.

After military service, Ford was elected to the House of Representatives, serving Michigan until he was tapped by President Richard M. Nixon to become vice president.

Ford became president after Richard Nixon resigned during the Watergate scandal. Ford’s daughter, Susan Ford Bales, who at the ceremony Saturday and christened the vessel in 2013.

Docked at Naval Station Norfolk, the USS Ford eventually will house about 2,600 sailors, 600 fewer than the previous generation of aircraft carriers. The Navy says that will save more than $4 billion over the ship's 50-year lifespan.

The air wing to support the Ford could add more personnel to the ship, which is designed to house more than 4,600 crew members.

The president's return visit Saturday was also during the White House’s "Made in America" week, during which Trump and other administration officials highlighted a wide assortment of U.S. products -- from trucks and helicopters to baseball bats and glass bottles for pharmaceuticals.