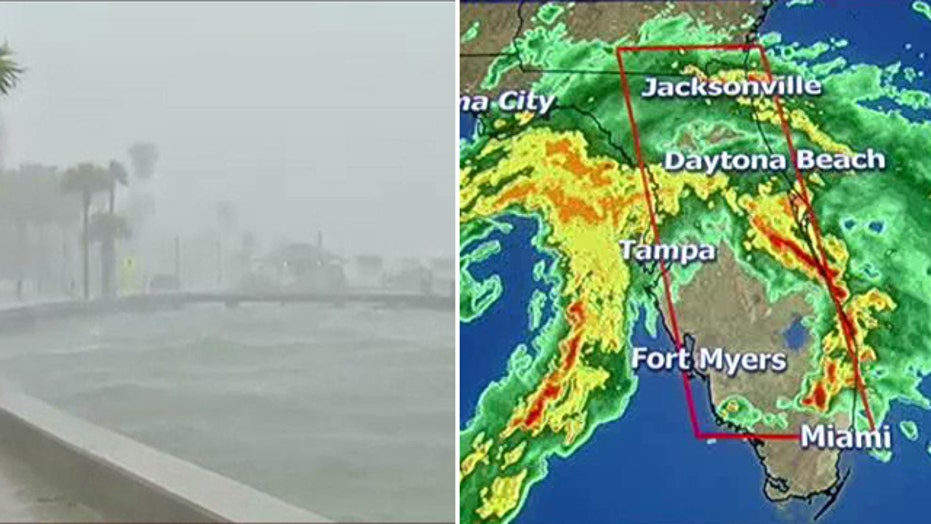 MIAMI – Tropical Storm Andrea, the first named storm of the Atlantic season, made landfall along the Florida Big Bend region, slamming the state with rain and wind Thursday, as it edged toward the coast of Georgia and the Carolinas.

Tropical Storm Andrea was not expected to strengthen into a hurricane but forecasters warned it could cause isolated flooding and storm surge before it loses steam over the next two days.

The National Hurricane Center in Miami said that as of 11 p.m. Thursday, Andrea was 40 miles west of Jacksonville, Fla., and had maximum sustained winds of 45 mph. It was moving northeast at 15 mph.

Forecasters discontinued the tropical storm warning for the west coast of Florida.

A tropical storm warning remains in effect along the East Coast, from Flagler Beach, Fla., to Cape Charles Light, Va. A warning also covers the Pamlico and Albemarle Sounds and the Lower Chesapeake Bay south of New Point Comfort.

Rains and winds from the storm were forecast to sweep northward along the Southeastern U.S. coast Thursday night and Friday. The storm was expected to lose steam by Saturday as it moves through the eastern United States, according to the U.S. National Hurricane Center in Miami.

Florida Gov. Rick Scott said one of the biggest risks associated with the storm for Florida was the chance of tornadoes, eight of which had been confirmed Thursday across the state. Scott urged residents to remain vigilant.

"This one fortunately is a fast-moving storm," he said. Slower-moving storms can pose a greater flood risk because they have more time to linger and dump rain.

Another threat to Florida's coast was storm surge, said Eric Blake, a specialist at the Hurricane Center. The center said coastal areas from Tampa Bay north to the Aucilla River could see storm surge of 2 to 4 feet, if the peak surge coincides with high tide.

Gulf Islands National Seashore closed its campgrounds and the road that runs through the popular beach-front park Wednesday. The national seashore abuts Pensacola Beach and the park road frequently floods during heavy rains.

Meanwhile, south Georgia residents were bracing for high winds and heavy rains that could lead to flooding.

On Cumberland Island off the Georgia cost, the National Park Service was evacuating campers as the storm approached.

"My main concern is the winds," said chief park ranger Bridget Bohnet. "We're subject to trees falling and limbs breaking, and I don't want anybody getting hurt."

Forecasters were predicting the storm would pass through Georgia overnight, and the island would likely re-open to tourists Friday.

"It looks like it's picking up speed and that's a good thing because it won't sit and rain on us so long," said Jan Chamberlain, whose family runs the Blue Heron Inn Bed & Breakfast near the Sapelo Island Ferry station on Georgia's coast.

In the Carolinas, Andrea's biggest threat was heavy rain, with as much as 6 inches expected, the National Weather Service said.

Forecasters didn't expect major problems, however, along the most vulnerable parts of the coast such as the Outer Banks, a popular tourist destination.

John Elardo, a meteorologist with the National Weather Service in Newport, N.C., said the storm would push major waves to the north and northeast, away from the Outer Banks, where a series of storms in the fall and winter wore away dunes and washed out portions of N.C. Highway 12, the only road connecting the barrier island to the mainland of North Carolina.

Andrea could bring up to a foot of flooding on the sound side of the Outer Banks, Elardo said.

The rain threatened to ruin a beach day Friday for Angela Hursh, 41, of Cincinnati, who had rented a house in Frisco, N.C.  Hursh was planning to soak in the hot tub and watch movies with her 9-year-old and 13-year-old daughters.

Doug Brindley, who owns a vacation lodging rental service on the northern end of the Outer Banks near Virginia, said he expects all outdoor activities to be washed out Friday, driving tens of thousands of early-summer vacationers toward unexpected shopping sprees.

"We're going to have rain and wind," said Brindley, who owns Brindley Beach Vacations and Sales. "Retailers are going to love it."

He expects new visitors streaming south from their homes across the U.S. Northeast to arrive tired and grumpy.

"They're going to be driving through that mess," Brindley said.

In Cuba, heavy rains associated with the storm system have soaked the western part of the island for the past several days, overflowing rivers and damaging crops. At least 30 towns were cut off by flooding, and more than 2,600 people sought refuge from the rising waters at relatives' homes or state-run shelters, the Communist Party newspaper Granma reported Thursday.