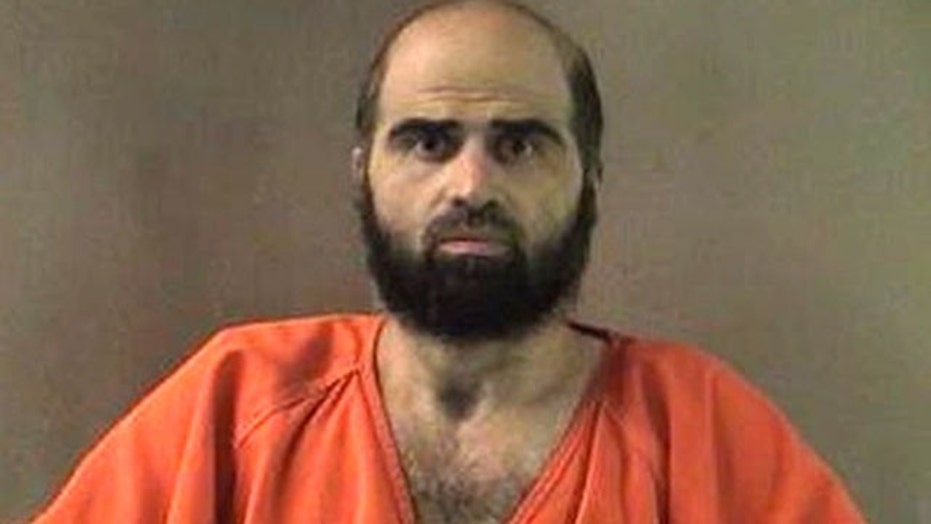 Major Nidal Hassan will represent himself, faces the death penalty

The U.S. Army soldier who is accused of committing one of the worst mass shootings in American history against his fellow, unarmed soldiers will begin his military trial Tuesday after a series of delays.

Maj. Nidal Malik Hasan doesn't deny that he carried out the November 2009 attack at Fort Hood, Texas, which left 13 people dead and more than 30 others wounded. There are dozens of witnesses who saw it happen. Military law prohibits him from entering a guilty plea because authorities are seeking the death penalty. But if he is convicted and sentenced to death in a trial that starts Tuesday, there are likely years, if not decades, of appeals ahead, and experts say he may never make it to the death chamber at all.

While the Hasan case is unusually complex, experts also say the military justice system is unaccustomed to dealing with death penalty cases and has struggled to avoid overturned sentences.

Eleven of the 16 death sentences handed down by military juries in the last 30 years have been overturned, according to an academic study and court records. No active-duty soldier has been executed since 1961.

A reversed verdict or sentence on appeal in the Hasan case would be a fiasco for prosecutors and the Army. That's one reason why prosecutors and the military judge have been deliberate leading up to trial, said Geoffrey Corn, a professor at the South Texas College of Law and former military lawyer.

"The public looks and says, `This is an obviously guilty defendant. What's so hard about this?"' Corn said. "What seems so simple is, in fact, relatively complicated."

Hasan is charged with 13 specifications of premeditated murder and 32 specifications of attempted premeditated murder. Thirteen officers from around the country who hold Hasan's rank or higher will serve on the jury for a trial that will likely last one month and probably longer. They must be unanimous to convict Hasan of murder and sentence him to death. Three-quarters of the panel must vote for an attempted murder conviction.

The jury will likely hear from victims and relatives of the dead. A handful of victims still carry bullet fragments in their body. Others have nightmares.

"It never goes away -- being upset that it's taken so long for this trial to come," said Staff Sgt. Alonzo Lunsford, who was shot in the head, stomach and upper body. "So now's the day of reckoning, which is positive -- very positive."

The trial's start has been delayed over and over, often due to requests from Hasan. Any of the hundreds of decisions large or small could be fair game on appeal. The entire record will be scrutinized by military appeals courts that have overturned most of the death sentences they've considered.

Hasan has twice dismissed his lawyers and now plans to represent himself at trial. He's suggested he wants to argue the killings were in "defense of others" -- namely, members of the Taliban fighting Americans in Afghanistan. The trial judge, Col. Tara Osborn, has so far denied that strategy.

Hasan has grown a beard while in custody that he says expresses his Muslim faith, but violates military rules on decorum. After a military judge ordered him forcibly shaved, an appeals court stayed that order and took another judge off the case.

The last man executed in the military system was Pvt. John Bennett, hanged in 1961 for raping an 11-year-old girl. Five men are on the military death row at Fort Leavenworth, Kan., but none are close to being executed.

An inmate was taken off death row just last year. Kenneth Parker was condemned for killing two fellow Marines in North Carolina, including Lance Cpl. Rodney Page. But Parker was given life without parole last September by an appeals court. The court found his trial judge should have not allowed him to be tried for both murders at the same time, nor should the judge have allowed testimony that the appeals court said was irrelevant to the crimes.

Parker's accomplice in the killings, Wade Walker, was also sentenced to death, only for the sentence to be overturned.

Examples abound of other death sentences set aside. They include William Kreutzer Jr., who killed one soldier and wounded 18 others in a 1995 shooting spree at Fort Bragg, N.C.; James T. Murphy, who killed his wife in Germany by smashing her head with a hammer; and Melvin Turner, who killed his 11-month-old daughter with a razor blade.

Part of the problem, experts say, is that death penalty cases are rare in military courts.

A study in the Journal of Criminal Law & Criminology identified just 41 cases between 1984 and 2005 where a defendant faced a court-martial on a capital charge. Meanwhile, more than 500 people have been executed since 1982 in the civilian system in Texas, the nation's most active death-penalty state.

While lawyers and judges in Texas may get multiple death penalty cases a year, many military judges and lawyers often are on their first, said Victor Hansen, another former prosecutor who now teaches at the New England School of Law. The military courts that are required to review each death-penalty verdict are also more cautious and likely to pinpoint possible errors that might pass muster at a civilian court, Hansen and Corn said.

Hansen compared the military's conundrum to small states that have a death-penalty law on the books, but never use it.

"You don't have a lot of experience or institutional knowledge," said Hansen, who compared it to "the reinventing of the wheel every time one is done."

If Hasan is convicted and sentenced to death, his case will automatically go before appeals courts for the Army and the armed forces. If those courts affirm the sentence, he could ask the Supreme Court for a review or file motions in federal civilian courts.

The president, as the military commander in chief, must sign off on a death sentence.

"If history is any guide, it's going to be a long, long, long time," Hansen said.