Michael Hari, seen in this July 2017 mugshot, is one of three men charged in connection with the bombing (Ford County Sheriff's Office)

Three Illinois men have been arrested and charged in connection with the August bombing of a mosque in a Minneapolis suburb, federal officials said Tuesday.

The men -- identified as Michael B. Hari, 47; Joe Morris, 22; and Michael McWhorter, 29 -- also face charges of possession of a machine gun and are suspects in the attempted bombing of an Illinois abortion clinic this past November, according to the U.S. attorney's office in Springfield, Ill.

A fourth man, 18-year-old Ellis Mack, also faces the gun charge, but he was not identified as a suspect bombing or attempted bombing. All four men are from Clarence, a rural community 35 miles north of Champaign-Urbana.

The Dar Al-Farooq Islamic Center in Bloomington, Minn., was bombed just before morning prayers on Aug. 5, causing extensive damage although no one was injured or killed. 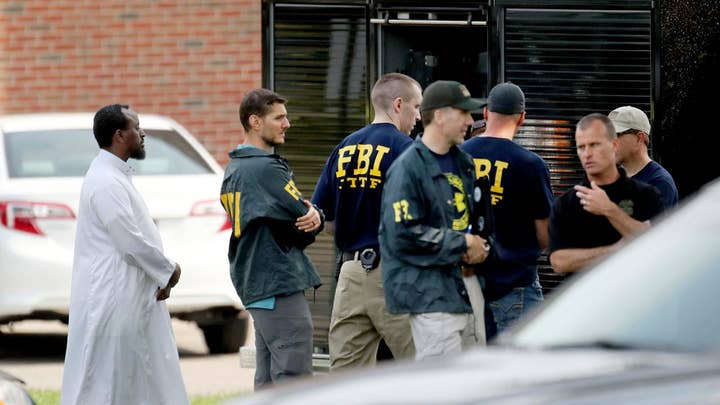 According to an affidavit obtained by Fox 9, McWhorter allegedly told an FBI agent during an interview that the three rented a pickup in Champaign and drove to Minnesota with a plan to bomb the mosque, according to a criminal complaint. He said they wanted to let Muslims know they are not welcome in the United States and "scare them out of the country," according notes taken by the FBI.

It wasn't clear from the complaint why the men may have targeted a mosque so far from Illinois.

Morris told one informant that Hari had promised to pay him and McWhorter $18,000 for participating in the mosque bombing, according to the complaint.

Photos of machine guns and bombmaking material allegedly possessed by the men. (FBI)

The blast, which happened just before morning prayers on a Saturday, damaged the imam's office across the hall from the worship space.

In announcing the charges against the men, interim U.S. Attorney Gregory Brooker described the bombing as a "tragedy for all Minnesotans."

McWhorter also allegedly admitted that the three men tried to bomb the abortion clinic on Nov. 7, again renting a truck to carry out the attack. McWhorter described a PVC pipe bomb and said Morris broke a window and threw it in, where it failed to go off, according to the complaint.

The complaint also said nothing about a possible motivation for the clinic attack.

The complaint said a tip led authorities to investigate the men, with a person sending the Ford County sheriff photos of guns and bomb-making material inside Hari's parents' home, where Hari often stayed. The tipster eventually became one of two informants in the case, according to the complaint.

Jaylani Hussein, executive director of the Minnesota chapter of the Muslim advocacy and civil liberties group Council on American-Islamic Relations, welcomed news of the arrests.

"This is definitely a relief that this case is finally to conclusion and those assailants-slash-suspects are apprehended and no longer a threat to our community," Hussein told the Associated Press in a telephone interview Tuesday.

The mosque primarily serves Somalis in the Minneapolis area. Minnesota is home to the largest Somali community outside of east Africa, with an estimated 57,000 people, according to the most recent census estimates.

Mohamed Omar, the center's executive director, said at the time that the mosque didn't receive any threats beforehand or claims of responsibility afterward. The FBI had offered a $30,000 reward for information that leads to a conviction in the bombing.

Officials said at the time that witnesses saw someone throw something from a truck or van before the blast and saw a vehicle speed away afterward. Mosque leaders later released security video from inside the mosque that caught the moments before the explosion, and some smoke and flying debris. The video didn't show the blast itself.