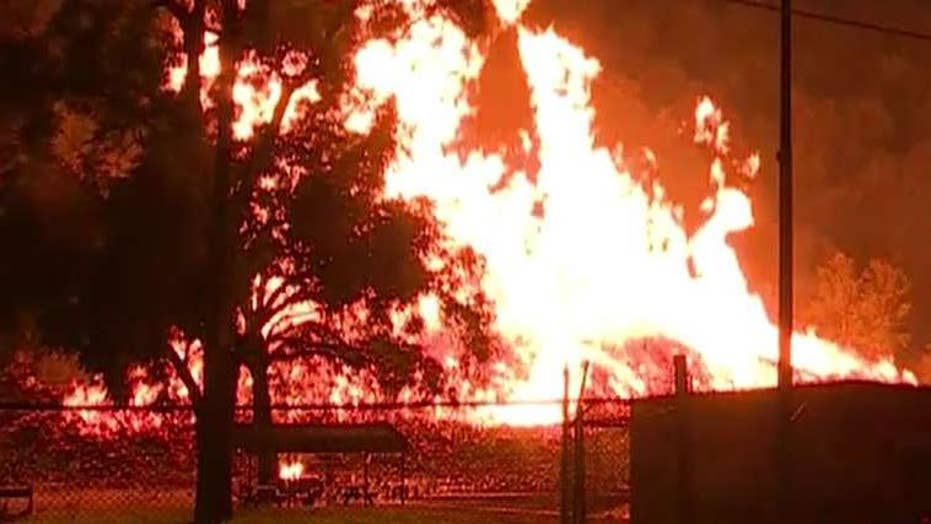 The massive fire that broke out at a Jim Beam warehouse in Kentucky has caused environmental damage to the local ecosystem.

The Jim Beam warehouse fire in Kentucky has begun to cause environmental damage to the local wildlife, as thousands of dead fish have littered the Kentucky River and are floating downstream.

Environmental officials in Kentucky say the water used to put out the blaze that consumed 45,000 barrels of bourbon has reached the nearby creek and eventually the river.

"I don’t believe I would want to swim in it right now. In a few days when all this passes, it will be fine," local resident Kim Strohmeier told WKYT. "A lot of fisherman in both the Elkhorn Creek and the river here...folks aren’t going to have much success fishing in the river in the next few weeks”

FIRE AT JIM BEAM KENTUCKY WAREHOUSE CONTINUES TO BURN AS 45,000 BARRELS OF BOURBON ARE DESTROYED:REPORTS

Strohmeier added the phenomenon was something he had never seen before.

The Environmental Protection Agency is now leading the investigation to determine how much impact the contaminated water will have on the local ecosystem, according to WKYT.

The agency says the number of dead fish in the Kentucky River will only increase and it's safe to fish as long as you don't eat anything caught.

Residents who wish to use the waterways are being told the water can be accessed, even though the smell of the dead fish may seem intense.

"We continue to see dead and dying fish," Mura said. "People using the Kentucky River in the area of the plume will see dead fish and may smell them."

The warehouse originally caught fire last Tuesday night and burned through the next morning, before a containment facility was set up. Jim Mura, a spokesman for the Kentucky Energy and Environment Cabinet said they let the bourbon barrels burn off until Saturday morning to prevent the water runoff from impacting local waterways.

Department of Fish and Wildlife Resources spokesman, Kevin Kelly said on Saturday it will take a couple of days to count the number of dead fish.