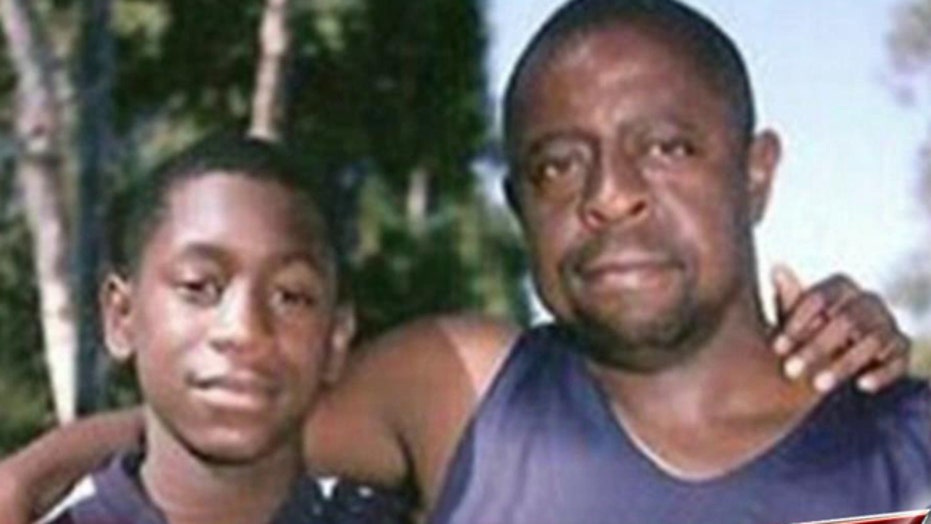 A father's heartbreak: Son killed by illegal in 2008

Jamiel Shaw remembers his son who was murdered at age 17

Jamiel Shaw recalls seeing his 17-year-old son, Jamiel Jr., lying dead in the street where he used to play, gunned down execution-style by one of the “invisible people.”

When Kathryn Steinle was killed on July 2 in San Francisco by a five-time deportee, the phrase found its way back into the mind of Shaw. He has spent the seven years since his son was killed fighting so-called "sanctuary" policies in cities like Los Angeles and San Francisco, where police refuse to work with federal authorities when they apprehend illegal aliens who, by law, should be deported. The crimes they subsequently commit -- including murder -- should never happen, Shaw said.

“We call it getting killed by invisible people, because they aren’t supposed to be here,” Shaw told FoxNews.com.

“We call it getting killed by invisible people, because they aren’t supposed to be here”

Among the hard-working illegal immigrants who come to America for a better life, there are hundreds of thousands of criminals, according to a Department of Homeland Security report. And among those criminals, there are people capable of murder, as the cases of Jamiel Shaw, Kathryn Steinle and several others that have occurred in recent years show.

Jamiel Shaw Jr. was killed by an illegal immigrant who had been released from jail the day before. (Shaw family)

Francisco Sanchez, the 45-year-old man who has confessed to Steinle's murder, had been released from jail in March after San Francisco authorities didn’t honor an Immigration and Customs Enforcement detainer request. Anti-illegal immigration advocates say it happens all too often, and note sobering statistics, including 2013 figures that show nearly half of the 438,421 illegal aliens who were deported had prior criminal convictions.

It is impossible to assess the records of those who are not caught, but between 2010 and 2014, some 121 illegal immigrants who had active warrants for lesser crimes were subsequently charged with homicide-related offenses, according to a letter Immigration and Customs Enforcement sent to Senators Chuck Grassley, R-Iowa, and Jeff Sessions, R-Ala. Some had slipped through the hands of local law enforcement agencies, including ones in the more than 100 cities in 33 states who have official policies of not working with federal immigration agents.

The man convicted of killing Shaw's son was an illegal immigrant who had been released from jail the day before on prior gun charges. He has since been sentenced to death, and gets no mercy from the father of the boy he killed.

“I wasn’t gonna let them get away with it,” Shaw said. “You can’t let people think, ‘If you kill my loved ones, I’m gonna forgive you.’”

Through his grief, Shaw became an advocate for enforcing immigration law, becoming a voice for all those whose loved ones have become the victims of criminals who Shaw believes should never have been in the U.S. Since Steinle's murder, more politicians seem to be paying attention, and lawmakers who once supported sanctuary policies are running from them.

Nine senators, including Grassley, Sessions and GOP presidential candidate Ted Cruz, R-Texas, signed a July 8 letter posing new questions to DHS secretary Jeh Johnson and blaming the administration for recent illegal immigrant-related homicides. They claim that, while the decision to not cooperate with the feds is made by local authorities, Washington could do more to force compliance.

Pedro Espinoza is shown in court in 2008. He was later convicted of killing Jamiel Shaw. (AP)

“Your Department has refused to confront so-called ‘sanctuary’ jurisdictions, endangering the public safety and leading to tragedies such as the recent killings of Kathryn Steinle in San Francisco, California, and Angelica Martinez in Laredo, Texas,” the letter said. “These deaths are the result of such sanctuary jurisdictions’ dangerous policies, and this Administration’s refusal to do anything to stop them.”

The illegal immigration debate was renewed even before the Steinle case, when Donald Trump spoke about the issue during the launch of his GOP presidential campaign in June. Trump’s remarks were deemed controversial by some, leading organizations such as ESPN, NASCAR, the PGA and Macys to part ways with the billionaire business mogul.

But while Trump’s comments may have turned off some corporate partners, the words have given comfort to those like Shaw, who said he initially didn’t intend to vote, but now plans to cast a vote for Trump.

“I felt happy for the first time,” Shaw said. “When that happened, I felt good. I felt hope. This is the hope that Obama thought he was gonna get. That was false hope.

“This is a beautiful thing," he continued, adding that after seven years, recent events now mean, "if you’re trying to stop illegal immigration, everybody’s listening.”